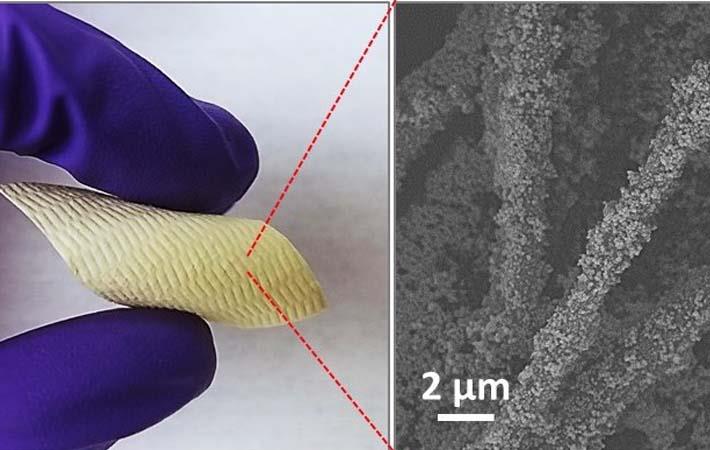 Scientists have developed a way to adhere a lightweight coating onto fabrics that is capable of neutralising a subclass of toxins used in chemical weapons - those delivered through the skin. The life-saving technique could eventually be used to protect soldiers and emergency responders. The study is reported in the ACS journal Chemistry of Materials.

Chemical weapons are nightmarish. In a millisecond, they can kill hundreds, if not thousands. Since their first use in World War I, dozens of chemical weapons with devastating potential have been developed. For example, just a pinprick-sized droplet of the nerve gas sarin on the skin is lethal.

Recently, scientists have begun exploring the use of zirconium-based metal-organic framework (MOF) powders to degrade and destroy these harmful compounds. MOFs are miniscule, porous structures that have large surface areas that allow them to absorb vast amounts of gases and other substances. The zirconium within them helps neutralise toxic materials. But making MOFs can be tedious, requiring high temperatures and long reaction times. Plus, most MOF powders are unstable and incorporating them onto clothing has proven challenging.

Dennis Lee, Gregory N Parsons and colleagues wanted to see if they could “grow” MOFs onto fabric at room temperature, potentially creating a lightweight shield that could be used on uniforms and protective clothing.

Building on previous work, the researchers exposed polypropylene, a nonwoven fabric commonly used in reusable shopping bags and some clothing, to a mixture consisting of a zirconium-based MOF, a solvent and two binding agents. To ensure that the coating spread evenly across the cloth, they treated the fabrics with thin layers of aluminum, titanium or zinc oxide. They tested this combination with dimethyl 4-nitrophenyl phosphate (DMNP), a relatively harmless molecule that has similar reactivity as sarin, soman and other nerve agents. They found that the MOF-treated cloths deactivated the DMNP in less than five minutes, suggesting this process is a viable means to create improved protective clothing.

The scientists received funding from the US Army Edgewood Chemical Biological Centre and the Joint Science and Technology Office for Chemical and Biological Defence. (SV)