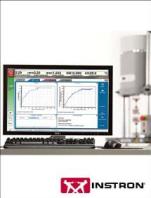 Instron, a leading provider of testing equipment designed to evaluate mechanical properties of materials and components, announces the release of the Specimen Self-Heating Control (SSHC) add-on to the versatile Instron WaveMatrix Software package for dynamic and fatigue testing of polymers and composites.

It maintains specimen temperature within a tight band and can save time, cost, and energy in the QC test lab, as well as in the development and optimization of composite formulations.

Polymers and composites show a pronounced self-heating effect during cyclic loading and a strong temperature performance correlation, so fatigue testing is traditionally conducted at rather low frequencies. The SSHC add-on uses the difference between the specimen’s continuously recorded temperature and a pre-specified temperature target to maximize the testing frequency in a closed loop.

For lower loading, where very large numbers of cycles-to-failure are expected, the system can run at a significantly higher frequency, which greatly reduces the test duration. At high loading, consistent specimen temperature is maintained even in the latter stages of the test, during which self-heating effects increase dramatically resulting in run-away specimen temperature with fixed frequency tests.

Dr Peter Bailey, Dynamic Testing Systems Specialist at Instron UK, comments: “For structural composites, a 5°C shift in temperature will often have a greater effect than a two-fold change in test frequency, so the benefit of a tightly controlled test temperature greatly outweighs moderate variation in test frequency. Specimen Self-Heating Control allows a test to always run at the maximum frequency possible while keeping the specimen temperature constant. In this way, we can offer improved cost effectiveness by increased throughput and minimized energy consumption. Additionally, this can give better consistency for polymers and composites due to previously unachievable confidence in test temperature.”

The temperature signal can be provided by any standard sensor system, e. g. via USB thermocouple integration or via any 0 – 10 Volt analog input, including infrared sensors. The user specified temperature window can achieve a tolerance of as little as ± 0.5 °C. The SSHC technology is applicable to any test geometry provided a specimen temperature transducer can be fitted, and is also compatible with temperature chamber testing.

Lastly, the SSHC add-on is available for all Instron dynamic testing systems provided they are equipped with the 8800 digital controller and supported by the latest version of WaveMatrix Software.