Jute is a coarse natural fibre. Two types of jute are commonly cultivated- corchorus capsularis (white jute) and corchorus olitorius (tossa jute). Only a small portion of the plant is utilized for extracting its fibre (approx 4-6%). An experimental investigation was taken up using this fiber in foundation beds. The tests in plane strain condition were performed on sand with randomly mixed jute fibers in different percentages of 0.125% to 1.0% by weight of dry sand with aspect ratios of 100 and 150. It has been observed that the jute fibres can be used for increase in bearing capacity of soil.

Physical and mechanical properties of jute fibres used in the study:

The jute fibres used in the study were torn pieces of jute bags and possesed following properties:

For comparative evaluation of allowable bearing pressure of virgin sand and sand with randomly distributed jute fibers, the experimental work was conducted in laboratory and results were presented in the form of Load intensity v/s Settlement plot. The Experimental studies have been done for Plane strain tests conditions on soil with randomly mixed jute fibers. The tests were conducted with different percentage of jute fibers and at different aspect ratios.

All the tests were conducted in plane strain conditions. The test tank (Fig.1) was of dimension 800mmx75mmx350mm. Jute fibers were cut in 60mm and 90mm lengths corresponding to aspect ratios (A.R.s) 10 and 15 respectively to be randomly mixed with soil in various percentages as 0.125%, 0.25%, 0.50% 0.75% 1.0% by weight of soil. The mixed soil was placed in test tank at R.D. =30%. The Load was applied gradually through screw jack attached with Proving Ring of 5.0 kN capacity. The footing of size used in the tests was 75mmx75mm which was made of steel channel. The test was conducted like a normal plate load test till the failure occurred. The settlements were measured for each load applied on footing. 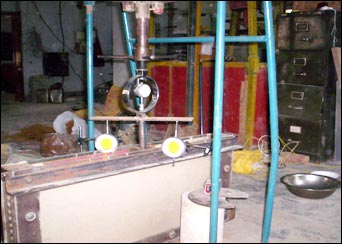 Total 11 tests were conducted, 5 nos on each aspect ratio and one for unreinforced soil. The test results are reproduced in Table 2.

This increase in bearing pressure is more at higher percentage of jute fibres. At aspect ratio 10, the bearing capacity is about five times and at aspect ratio 15, it is about six times that of virgin soil.

Significant improvement in bearing capacity is observed when sand is reinforced with jute fiber. As the jute fiber has significant life (4 to 5 years after rot resistant treatment) and is available at practically no cost, the jute fiber reinforced sand bed can be a reliable foundation for rural housing on soft soils, foundation for temporary structure for the instrument storage, erection of heavy instrument at construction site, highway sub grade etc.

The aspect ratio (AR) as 15 causes more than 6 times increase in bearing capacity, hence can be adopted for sites with confidence. However, the AR as 10 also increases the bearing capacity by 5 times.

The jute fibres quantity by 0.5% of weight of dry soil may double the bearing capacity of virgin soil, hence may be adopted for sites.

The above findings are for the jute properties as mentioned in Table-1, which are the average properties of medium class jute. For higher class jute, the bearing capacity may still increase. However the laboratory model tests are recommended before suggesting its use.

Regulatory Issues & Suggestive Measures for Promotion of Jutes Use

It is evident from the above study that the jute can be used in foundation beds for improvement of bearing capacity of soils. Following are some points which if implemented, may promote not only production but also application of jute:

This article has been written in association with Mr. T. Sanyal who is a Consultant in JMDC, Kolkata, India and Ms. Rachna Vaish, who is associated with NIH, Roorkee. 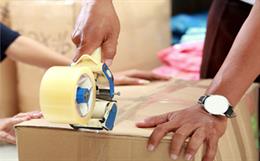 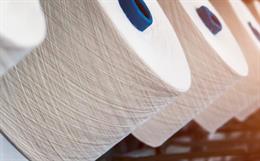 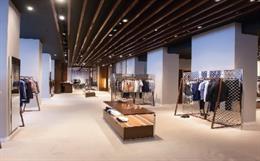 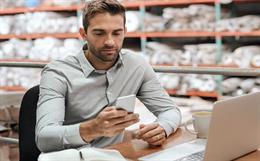 Business Strategies: Navigating Through the Pandemic