EDANA, the international association serving the nonwovens and related industries has 247 member companies in 35 countries. Every year the association organises a number of international conferences and is the sponsor of INDEXTM, the world's leading nonwovens exhibition. Pierre Wiertz, general manager, EDANA discusses at length the market for nonwovens globally.

TT: How big is the market for nonwovens globally? At what rate is it growing?

The worldwide production of nonwoven roll goods reached 8.9 million tonnes in 2014, equivalent to $35.6 billion. The tonnage volume was equal to about 262 billion sq m in 2014. EDANA and INDA forecast worldwide nonwovens production will continue to grow, and expect that in the period from 2014 through 2020 the industry will expand at an annual average rate of 5.7 per cent and reach a volume of at least 12.4 million tonnes. 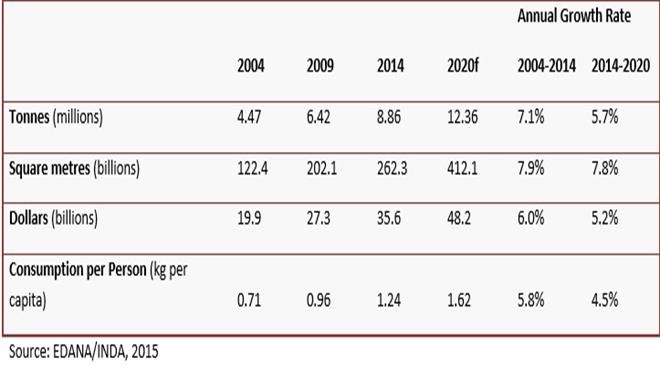 TT: Which are the largest markets, both in terms of production and consumption?

TT: Which are the new markets that are opening up for the production and consumption of nonwovens?

TT: Which major factors are responsible for the growth?

The strength of the economy and demographic trends are the significant drivers of demand within the nonwovens industry. Consumer discretionary spending and business investment-both correlated to the strength of the economy-drive demand in nearly every nonwoven end use category, while certain demographic trends-such as births and aging-drive demand in the remaining end use categories. The basic building blocks of nonwovens' demand are thus based upon the global economic and population forecasts. Growing purchasing power allows people to buy nonwoven-based products to fulfil their-until then- unmet needs in personal care, healthcare, etc. With their population's disposable income on the rise, many Asian countries lead the way in these favourable trends for nonwovens, thereby demonstrating our industry's products' tremendous improvement of people's lives.  This also applies to the Latin American and African markets.