University of Rhode Island
TT: How important is this innovation of smart bandage - the bandage which can detect infection at an early stage?
We believe this could be a game-changer for a number of reasons. A point-of-care and real-time method of monitoring wounds for infection, without the need to remove the bandage, reduces associated pain and chance of exacerbating the infection. This is especially true in the case of patients with large wounds in hospitals, which can be tedious for healthcare workers to remove, clean, and rebandage.
TT: How did the idea to work on such a project strike you? How long have you been working on this?
Our lab has been developing biosensors from carbon nanotubes for many years. In other projects, we have developed carbon nanotubes that detect lipids and other biomarkers inside of living cells and animals. This current project featuring the carbon nanotubes in a wearable technology is somewhat different and a new direction for our lab.
TT: Could you tell something about the concept and principle.
Certain formulations of carbon nanotubes give off near-infrared light (longer wavelength) when they are illuminated with visible light (shorter wavelength), most commonly known as fluorescence. The near-infrared light can be modulated by molecules in the vicinity of the nanotubes. One such formulation of nanotubes responds to hydrogen peroxide. We took this formulation and encapsulated the nanosensors within individual microfibres that stabilised them but allowed the hydrogen peroxide to reach the nanotubes, thus creating a wearable sensing platform. It should be noted that in parallel to the wearable sensor, we are developing a miniaturised, hand-held device that illuminates the platform and detects the near-infrared light. 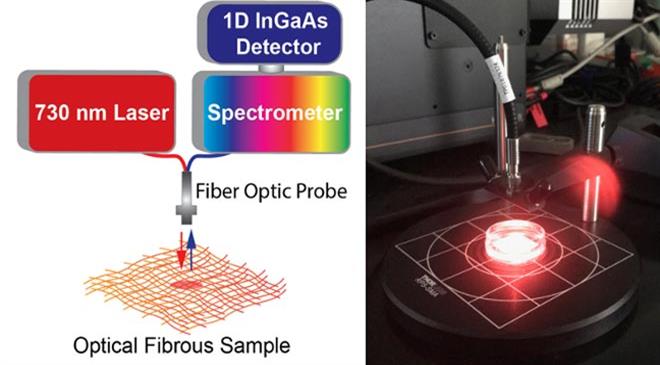 TT: What is the role of hydrogen peroxide in this innovation? How and why is it produced in infected cells? Is it produced only in cells carrying infection? At what stage of infection it is produced?
Most cells in the body produce at least some hydrogen peroxide. In wounds, it is produced primarily by white blood cells (macrophages) and its role is two-fold. At low concentrations, it can signal other cells to migrate towards the wound and aid in tissue repair. At higher levels, it can indicate the presence of pathogenic infections that the body is attempting to deactivate and/or kill (in the case of bacteria).
TT: Do healthy cells not produce hydrogen peroxide?
They do, and they use the peroxide as a "signalling molecule" for normal cell functions.
TT: There must also be other indicators or molecules specific to infection. Why did you choose only hydrogen peroxide?
There are many other biomarkers that can indicate infection in wounds. We had already been investigating the formulation of carbon nanotubes that specifically detect hydrogen peroxide and so we decided to use that as the sensor. In future iterations, developing sensors for other biomarkers is desired.
TT: What were the challenges in this research? Do these nanotubes not get damaged during use? How do you integrate these into a bandage? Is there a process for that?

We integrate the nanotubes into the microfibres in a process known as core-shell electrospinning using high voltage and FDA-approved polymers. The process was optimised over a period of ~2 years and results in a white gauze-like material. The novelty in the method is that we can permanently encapsulate the nanotubes and retain their fluorescence sensing properties in a wearable and biocompatible platform. This has not been achieved previously. 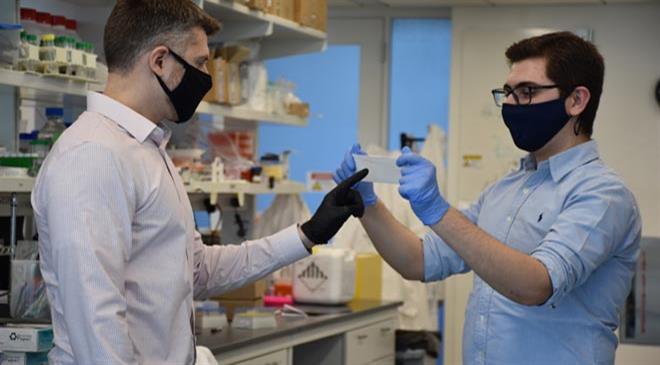 TT: What are microfibres which will be used to encapsulate these nanotubes? What are these made up of? Are these different from the fibres of the bandage?
Microfibres are composed of two FDA-approved polymers in a core-shell fashion. The nanosensors are loaded into the core along with polyethylene glycol (PEG) and surrounded by a shell composed of polycaprolactone (PCL). Both polymers were carefully chosen to enhance the properties of the final product. The microfibres are smaller than the fibres in a gauze bandage.
TT: What is the role of wearable device which will catch the infection? How will the information be transmitted from the bandage to the device?
We are developing a hand-held device to obtain the readout from the wearable sensors. As the technology progresses, we hope to translate the hand-held instrument into an even more compact, wearable device. The information is transmitted optically through near-infrared light to the device.
TT: How will the information about presence of infection used? Will it be used by the person who is using the bandage or any other agency, and how?
We imagine the data will be most helpful to healthcare workers in a hospital or nursing home setting caring for patients with chronic wounds (elderly or diabetic). The information can inform the nurses and doctors to change the bandage and/or administer antibiotics.
TT: At what stage is the research at? What kind of studies have been done and what studies are you planning now on this?
We are currently testing the bandages in in-vitro wound mimics. These are laboratory-grown cells undergoing infection. Preliminary results are promising. We will next move to animal models to test the bandages. 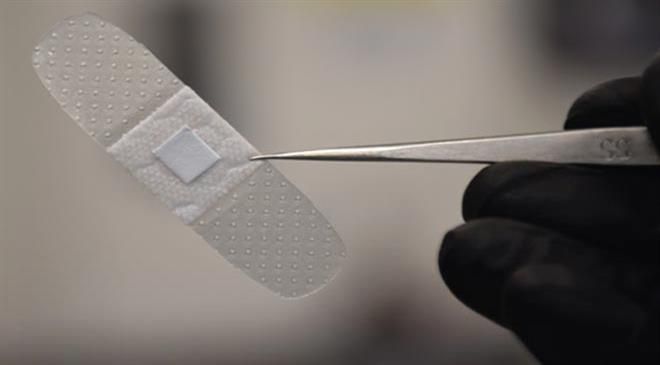 TT: How soon is such a bandage expected to be available? Do we have any similar products in the market?

Hard to say. Wearable technologies are easier to bring to market than injectables/implantables. However, we are only now moving to animal models. We are still in the 'several years' timescale until these arrive on the market.

TT: Do you plan to file patent for this innovation?
A provisional patent has been filed to protect the intellectual property.
TT: Besides carrying this research forward, what more do you want to take up?
Carbon nanotubes have commercial applications as additives in materials and electronics. My general research interest is in giving carbon nanotubes a "new job" in the biomedical field.
Published on: 02/03/2021