A team of scientists and researchers have discovered twistrons, high-tech yarns that generate electricity when stretched or twisted. The development is significant since electronic textiles are of major commercial interest, writes Savita Verma.
It was hard to find muscles which convert mechanical energy into a reasonable amount of electrical energy, something reverse of what happens in the body. Body muscles function because electrical signals get converted into mechanical energy which move the muscles. This has been made possible by Ray Baughman, director of the NanoTech Institute, University of Texas in Dallas and the team comprising scientists from South Korea, Virginia Tech, Wright-Patterson Air Force Base and China. The team has discovered twistrons, high-tech yarns that generate electricity when stretched or twisted. Twistrons use stretch-induced changes in the twist of a coiled carbon nanotube yarn to generate electricity. Stretching the coiled twistron yarns 30 times a second generated 250 watts per kilogramme of peak electrical power when normalised to the harvester's weight.
"Although numerous alternative harvesters have been investigated for many decades, no other reported harvester provides such high electrical power or energy output per cycle as ours for stretching rates between a few cycles per second and 600 cycles per second," Baughman says. The yarns actually produced over a hundred times higher electrical power per weight when stretched compared to other weavable fibres reported in literature. The development is significant since electronic textiles are of major commercial interest.
The technique may be used to power cities by harvesting energy from oceans using these twistrons, but "the cost of making the carbon nanotube yarn in the laboratory is currently too expensive." However, this cost is likely to be not prohibitively expensive for such applications as the self-powered sensors that are woven into clothing, according to Baughman, who is a member of the National Academy of Engineering and the Academy of Medicine, Engineering and Science of Texas, a foreign member of the European Academy of Sciences and a Fellow of the Royal Society of Chemistry. Baughman talks about the new yarns and their potential uses.
TT: How did the idea to generate electricity from yarns strike you? What was the immediate concern or need that you wanted to address through this development?

We have for a very long time been inventing new types of artificial muscles, which convert electrical energy to mechanical energy. For each muscle type, we tried to run the artificial muscle in reverse to convert mechanical energy to electrical energy. Our effort was largely unsuccessful until we discovered our twistron harvesters, which use stretch-induced changes in the twist of a coiled carbon nanotube yarn to generate electricity. 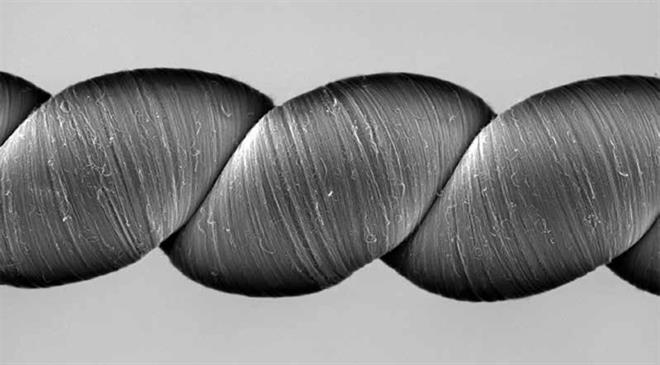 Just like the case for a coiled metal wire spring found in your hardware store or a coiled rubber band (like used to power a rubber band powered toy airplane), stretching  a coiled carbon nanotube yarn causes the yarn to increase the twist. Since the carbon nanotubes in the yarn are electrically conducting and have the nanoscale dimensions needed to electrochemically store electrical charge, this increased yarn twist forces stored charges closer together, thereby increasing yarn voltage. This increased yarn voltage, relative to a counter electrode, enables the harvesting of mechanical energy as electrical energy.

TT: How do you see the use of the electricity generated from these yarns?

We believe that our twistron yarns provide a major advance for commercial needs for everything from harvesting the energy of human motion and powering sensors on the Internet of Things (IoT) to harvesting the enormous energy in ocean waves. The cost of making the carbon nanotube yarn in the laboratory is too expensive for using our twistrons for harvesting the energy of ocean waves to power cities. However, this cost is likely to be not prohibitively expensive for such applications as selfpowered sensors that are woven into clothing. In our initial work, these energy harvesters were used in the ocean to harvest wave energy, combined with thermally driven artificial muscles to convert temperature fluctuations to electrical energy, and sewn into textiles for use as self-powered respiration sensors. Other applications might eventually be feasible, like generating electrical energy from the deformation of automotive springs and the deformations of automotive tyres.

In our previous work, published in papers in Science and elsewhere, we have shown that our coiled polymer fibre muscles and our coiled carbon nanotube hybrid artificial muscles (which are the same as our twistron harvesters, except they are filled with an environmentally responsive guest) can generate mechanical energy from fluctuations in temperature or humidity. To provide a harvester system that generates electricity from this mechanical energy, we connect the twistron mechanical energy in series to our environmentally powered artificial muscles. Incidentally, our polymer artificial muscles (which can be cheaply made from fishing line or sewing thread) are being commercially developed for application in comfort adjusting clothing. Also, they are of interest in the fashion world to provide dramatic effects by morphing wearables.

TT: Can you regulate the amount of electricity generated in the process devised by your team?

The output power from our twistron harvesters increases with increasing amplitude of stretch and increasing frequency of stretch. We have made textiles that both harvest mechanical energy and store it for subsequent use (such as in sensors that sense body movements and biological functions and remotely communicate information, thereby eliminating the need for battery recharge or replacement).

For harvesting energy from ocean waves, the electrolyte exploited was ocean saltwater.  For harvesters that are woven or sewn into a textile, we use solid-state electrolytes (called gel electrolytes). There is a chemical potential difference between the nanotube yarn and the electrolyte, which causes either holes or electrons to be injected into the yarn, depending upon whether the pH of the electrolyte is low (like pH for 0.1 M for aqueous HCl) or high (like pH 13 for 0.1 M KOH), respectively.  Stretching the yarn causes the capacitance of the yarn to decrease, which increases the voltage associated with this injected charge, thereby enabling the harvesting of electricity.