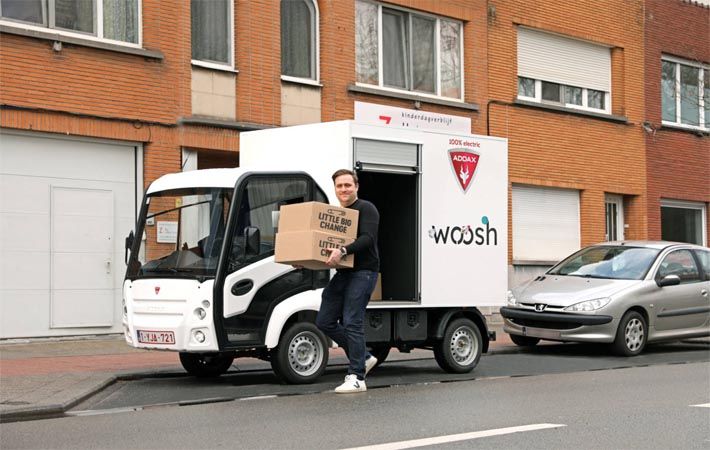 Pic: Ontex
Ontex and startup Woosh are collaborating to make recycling of used disposable diapers a reality in Belgium. With other partners from the waste industry, Woosh and Ontex aim to create the first diaper recycling site in the country. The diaper waste will be recycled into new raw materials. Ontex is working with other companies to make its diapers recyclable.

“It is our mission to enable diaper recycling on a large scale,” said Jeff Stubbe, co-founder of Woosh. “We are launching a delivery and collection service of Ontex’s Little Big Change diapers for nurseries. We are now starting in Mechelen, Bruges, Ghent, then deploying our services to other Belgian cities, notably Brussels in the coming months. By 2024, we aim to reach 1,000 nurseries in Belgium alone, and expand our service to other European countries.”

Waste and incineration can be avoided by recycling used disposable diapers. This requires cooperation between different partners - from suppliers of materials for diapers, to manufacturers like Ontex, to waste collection and to recycling partners using the suitable technology. "In Belgium today, the separate collection of diaper waste remains limited, which hinders the progress of diaper recycling. Waste companies are not motivated to invest in the recycling because there is not enough separated diaper waste. Due to the lack of recycling facilities, there’s also little incentive to separate diaper waste," Stubbe continued.

“As a major player in essential personal hygiene, we at Ontex recognise the need to find alternatives to landfill and incineration. We work with recycling companies to make our diapers easier to recycle, in line with our sustainability strategy to move toward a circular economy business model. We support Woosh’s mission to make large-scale diaper recycling a reality in Belgium and other countries,” said Annick De Poorter, Ontex’s executive vice president for Innovation, Sustainability and Quality.

The collection of used diapers is the first critical step in setting up the process needed for large-scale diaper recycling. Together with other partners from the waste industry who are willing to invest, Woosh and Ontex aim to enable the first diaper recycling site in Belgium. The diaper waste will be recycled into new raw materials.

"This project contributes to the ambitions to make Belgium and the Flanders region a recycling hub at European and world level. In addition to asbestos waste and plastics, diaper waste is a priority for the Flanders region," said Stubbe. "The initial reactions of the nurseries are very positive. On April 1 we officially start rolling out this diaper service in the city of Mechelen, Belgium, in close cooperation with the city council and the circular economy department of the city."

"In a nursery, diaper waste is a daily challenge," said Fatima Arbaji of Het Zandkasteel nursery in Mechelen. "Approaching diaper waste in an ecological way is certainly not obvious. Waste separation, waste collection, recycling, quality diapers, all through an ecological service, were important elements for us to choose Woosh. We tested the Little Big Change diapers and are happy with the result. It’s a good feeling to help address the environmental challenge related to diaper waste."

“We are proud to be the first city that accepted Woosh’s collaboration request. As a city council, we believe in circular economy business models, which recycle and reuse raw materials. This is needed to reduce waste and lower CO2-emissions. The nurseries in the Rivierenland region around Mechelen will also use this diaper distribution and collection service,” said a joint statement from city of Mechelen alderwomen Marina De Bie, Greet Geypen and Gabriella De Francesco, who manage the city’s sustainability, economy and family.

Ontex and startup Woosh are collaborating to make recycling of used disposable diapers a reality in Belgium. With other partners from the waste industry, Woosh and Ontex aim to create the first diaper recycling site in the country. The diaper waste will be recycled into new raw materials. Ontex is working with other companies to make its diapers recyclable.
Protective Textile

FLIR to develop fabrics against chemical, bio agents for US agency
Protective Textile

US' Glatfelter to begin taking over Georgia-Pacific’s nonwoven section