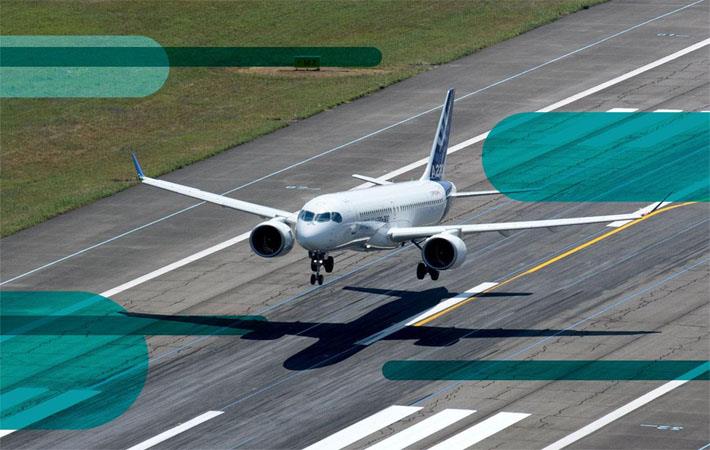 Pic: Airbus/Solvay
Solvay has supplied the resin used in the wing manufacturing process by Bombardier, Canadian aircraft manufacturer. Now, the UK’s Royal Academy of Engineering has honoured the Belfast operation of Bombardier with the UK’s most prestigious prize for engineering innovation for its advanced composite wing that reduces the environmental impact of airplanes.

Every year, the Royal Academy of Engineering’s MacRobert Award, the UK’s most prestigious prize for engineering innovation, recognises “teams that demonstrate outstanding innovation, societal benefit and commercial success”. In 2019, for its 50th anniversary, the award went to the Bombardier team in Belfast that developed and manufactures the world’s first resin-infused wing designed for commercial aircraft, namely the Airbus A220.

Composite materials have been used to make airplanes. The aerospace industry is relying on new materials to replace metal, thus increasing corrosion resistance, simplifying maintenance and making the aircraft lighter in order to reduce fuel consumption and carbon dioxide emissions. However, the special thing in this case is the way the composites are used in the manufacturing process.

Bombardier’s proprietary Resin Transfer Infusion (RTI) process involves infusion of liquid resin into dry carbon fibre ‘preforms’ during the part manufacturing process. This differs from common aerospace ‘prepreg’ manufacture, where the carbon fibre is supplied pre-impregnated with resin, which must be stored at low temperature until ready for use.

The advantages of RTI are numerous: the possibility to manufacture large and complex one-piece structures, which reduces the need for many different parts and therefore fasteners; this in turn reduces waste during manufacture and improves aerodynamics. Furthermore, by reducing the need for refrigeration, this method saves energy and yields materials that remain usable for a longer time, which also simplifies manufacturing.

“Resin infusion isn’t traditionally used in aerospace,” explains David Bacon, account manager at Solvay’s Composite Materials business unit. “It’s typically used to manufacture boats, and in the field of wind energy. But it’s obvious there is a lot to gain in spreading its use in commercial aircraft manufacturing.”

Bombardier developed their own RTI process for the wing at their large-scale manufacturing and assembly facility in Belfast, Northern Ireland. The wing was developed specifically for the Bombardier C Series aircraft programme, which subsequently became the Airbus A220 (following a partnership arrangement with Bombardier, Investissement Quebec and Airbus). It can so far only be found on this successful narrow body, medium range aircraft family, which entered service in 2016, though it seems only logical that other types of aircraft could be equipped with this new generation of lighter wings in the future.

From the Solvay perspective, the group has enjoyed a “long-standing relationship with Bombardier,” says Bacon. “We sell them products across our portfolio, from adhesives to pre-pregs and resins for a number of their aircraft programmes.” For the RTI wing, Solvay’s Cycom 890 epoxy resin system was selected when the project was initiated, over a decade ago. “It was chosen for its properties such as low viscosity, which enables the infusion of large parts at once,” continues Bacon.

“The Royal Academy of Engineering’s MacRobert Award validates the entire development and manufacturing process of this innovative wing, and consequently, the performance of Solvay’s resin material on this programme,” says Bacon.

Solvay has supplied the resin used in the wing manufacturing process by Bombardier, Canadian aircraft manufacturer. Now, the UK's Royal Academy of Engineering has honoured the Belfast operation of Bombardier with the UK's most prestigious prize for engineering innovation for its advanced composite wing that reduces the environmental impact of airplanes.
More Solvay News...
Raw Material

Covestro to get € 225 million loan from EIB
Raw Material