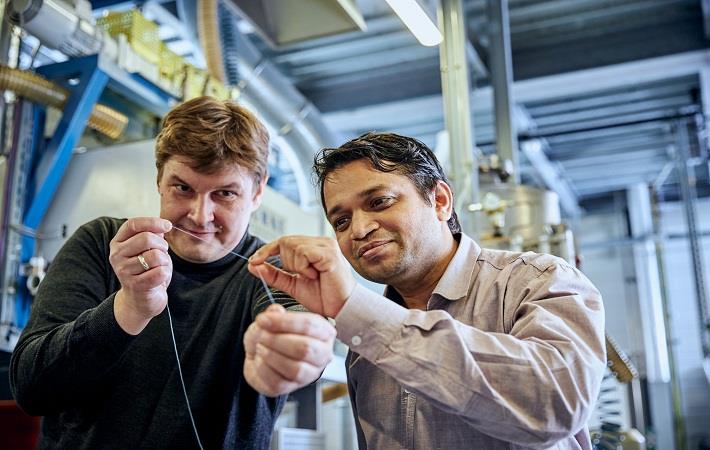 Scientist Pavan Manvi, RWTH Aachen University (right) and Covestro researcher Dr. Jochen Norwig
Covestro, the Institute of Textile Technology at RWTH Aachen University and various textile manufacturers, are developing a production process on an industrial scale for making a new breed of elastic textile fibres market ready. The fibres based on CO2, can be used for stockings and medical textiles and might replace elastic fibres based on crude oil.

The elastic fibers are made with a chemical component that consists in part of CO2 instead of oil. This precursor called cardyon is already used for foam in mattresses and sports floorings. And now it is being applied to the textile industry.

“That’s a further, highly promising approach to enable ever broader use of carbon dioxide as an alternative raw material in the chemical industry and expand the raw materials base,” said Dr. Markus Steilemann, CEO of Covestro in a press release by the company. “Our goal is to use CO2 in more and more applications in a circular economy process and save crude oil.”

The fibres are made from CO2-based thermoplastic polyurethane (TPU) using a technique called melt spinning, in which the TPU is melted, pressed into very fine threads and finally processed into a yarn of endless fibres. Unlike dry spinning, which is used to produce conventional elastic synthetic fibres such as elastane or spandex, melt spinning eliminates the need for environmentally harmful solvents. A new chemical method enables carbon dioxide to be incorporated in the base material, which also has a better CO2 footprint than traditional elastic fibres.

“The CO2-based material could be a sustainable alternative to conventional elastic fibres in the near future,” said professor Thomas Gries, director of the Institute of Textile Technology at RWTH Aachen University. “Thanks to our expertise in industrial development and processing, we can jointly drive establishment of a new raw materials base for the textile industry.”

Development of the method of producing fibres from CO2-based thermoplastic polyurethane (TPU) has been funded by the European Institute of Innovation and Technology (EIT). It will now be optimised as part of the ‘CO2Tex’ project, which is to be funded by the German Federal Ministry of Education and Research (BMBF) so as to enable industrial production in the future. ‘CO2Tex’ is part of ‘BioTex Future’, a project initiative of RWTH Aachen University. The initiative is devoted to developing production and processing technologies to facilitate the future market launch of textile systems from bio-based polymeric materials.

What makes the CO2-based TPU fibres so special is their properties: They are elastic and tear-proof and so can be used in textile fabrics. Initial companies from the textile and medical engineering sectors have already tested the CO2-based fibres and processed them into yarns, socks, compression tubes and tapes.

The aim of launching CO2-based textiles on the market is to promote a material cycle in the textile and clothing industry based on sustainable resources.

Covestro is among the world’s largest polymer companies. Its business activities are focused on the manufacture of high-tech polymer materials and the development of innovative solutions for products used in many areas of daily life. The main segments served are the automotive, construction, wood processing and furniture, and electrical and electronics industries. Other sectors include sports and leisure, cosmetics, health, and the chemical industry itself. (PC)

Covestro, the Institute of Textile Technology at RWTH Aachen University and various textile manufacturers, are developing a production process on an industrial scale for making a new breed of elastic textile fibres market ready. The fibres based on CO2, can be used for stockings and medical textiles and might replace elastic fibres based on crude oil.
Raw Material