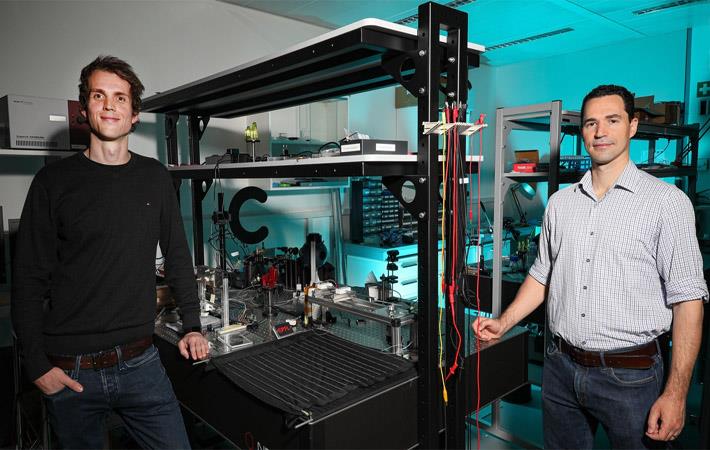 Pic: EPFL
Scientists at EPFL have developed electronic fibres which can be embedded in textiles to collect information about body parameters. The fibres help measure subtle and complex fabrics deformations, and through that information about one’s body. The technology uses transmission line theory and can have several applications, such as in health care and robotics.

The research has been carried out by Professor Fabien Sorin and doctoral assistant Andreas Leber, at the Laboratory of Photonic Materials and Fibre Devices (FIMAP) in EPFL's School of Engineering. The technology can be used to detect body's movements - and many other factors. "Imagine clothing or hospital bed sheets capable of monitoring your breathing and physical gestures, or AI-powered textiles that allow humans to interact more safely and intuitively with robots," says Leber. "The flexible transmission lines that we've developed can do all of this."

The researchers invented a single sensor that can detect different kinds of fabric deformation like stretching, pressure and torque at the same time. "Finding a method for calculating all that was our biggest challenge, because it's really difficult for sensors to measure several movements simultaneously," says Leber. "Also, conventional sensors have several drawbacks. First, they are fragile and break easily. Second, you need a lot of them to cover a large area, which eliminates many of the advantages of fabrics. And third, each type of conventional sensor can detect only one kind of deformation."

But by incorporating concepts from reflectometry, Sorin and Leber were able to create flexible fibre-shaped sensors that open up new doors for smart textiles. "Our technology works similar to a radar, but it sends out electrical impulses instead of electromagnetic waves," explains Leber. "Our fibre sensors operate like transmission lines for high-frequency communication. The system measures the time between when a signal is sent out and when it's received, and uses that to determine the exact location, type and intensity of deformation."

This kind of detection technology has never before been used in applications requiring high mechanical flexibility and powerful electronic performance, which are two key features for distortion identification.

Creating the fibres is a complex task involving liquid metal, which serves as the conductor, and an optical fibre fabrication process. "The structure is just a few micrometres thick and has to be perfect, otherwise it won't work," says Leber. With these fibres, the entire surface of a fabric becomes one large sensor. "The trick was to create transmission lines made entirely of flexible materials, using a simple method that can be scaled up easily," adds Sorin.

The team's research drew on a variety of disciplines including electrical engineering, mechanical engineering, materials science and process engineering. The next step will be to make the technology more portable by shrinking the electronic component.

Scientists at EPFL have developed electronic fibres which can be embedded in textiles to collect information about body parameters. The fibres help measure subtle and complex fabrics deformations, and through that information about one's body. The technology uses transmission line theory and can have several applications, such as in health care and robotics.
Smart Textiles