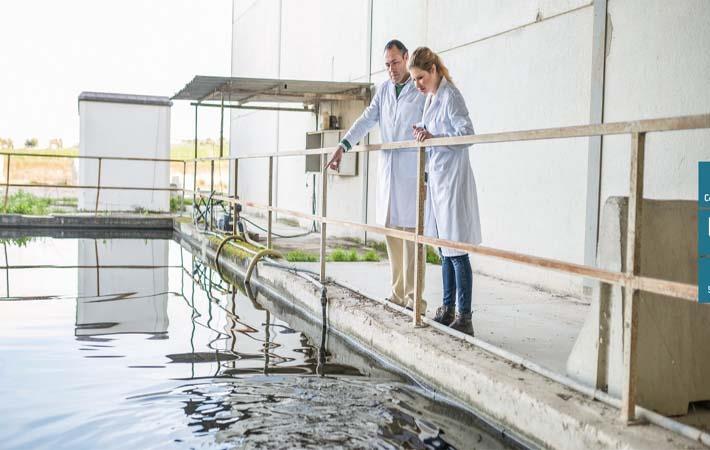 Pic: SGL Carbon
Scientists in a project supported by the European Union as part of the Horizon 2020 programme are trying to desalinate sea water using carbon fibres and bacteria. The initiative will go a long way in solving the problem of drinking water shortage. Seawater desalination with carbon fibres is cheaper and more energy-efficient than conventional reverse osmosis.

Not far from the port city of Denia, on the Costa Blanca in Spain, engineers are currently building the first drinking water treatment plant based on microbial assisted desalination as part of the project "Microbial Desalination for Low Energy Drinking Water" (MIDES), an initiative being supported by the European Union as part of the Horizon 2020 programme. The project’s goal is to show that bacteria and carbon fibre can help treat seawater using significantly less energy than conventional desalination plants.

As energy conductors, carbon fibres are part of the innovative process for the treatment of drinking water. Up until now, seawater has generally been desalinated using a process known as reverse osmosis. Massive pressure forces the salty water through a membrane between two tanks. The membrane prevents the salty constituents in the water from passing through, meaning that the water collected in the tank on the other side is pure. The disadvantage: the pressure requires energy. Currently, about three kilowatt-hours of energy are needed to desalinate one thousand litres of seawater.

“With new desalination cells using carbon fibres, we are already starting one step earlier in the process,” Dr. Oswin Öttinger, head of New Technologies in SGL Carbon’s Central Innovation division, says. Technically speaking, the new process uses the principle of electrodialysis. Two differently polarised electrodes extract the majority of the sodium and chloride ions from the seawater. These ions migrate through two membranes into two separate chambers and cannot go back to the original chamber. Largely salt-free water remains in the middle chamber, which is then desalinated through reverse osmosis, requiring considerably less energy.

However, these electrodes also require an external source of electricity. At least that used to be the case. Now bacteria are producing the energy required in the new desalination cell. As the bacteria feed on wastewater, they produce electricity. Yet the bacteria don’t like electrodes made of metal. “That’s why we use carbon electrodes in the new desalination cell,” Öttinger explains. The extremely thin carbon fibres provide a support structure for the bacteria, and the electricity they produce is conducted through the carbon fibres.

“This innovation completely changes desalination: the energy generated from the wastewater makes it possible to produce drinking water from seawater at a very low cost,” says Frank Rogalla, project coordinator and head of research and innovation at FCC Aqualia SA, a partner company in the project. It’s a fascinating solution that could help defuse looming conflicts over drinking water throughout the world and, what’s more, help poorer countries in the process. Along the way, however, many aspects of this approach still need additional research. For example, it remains unclear which bacteria work best with which type of wastewater.

To keep the bacteria as comfortable as possible, the SGL team and other project partners are working on different approaches. Could it help the bacteria, for instance, to apply electrical voltage to the water during the colonisation phase? Or do the tiny energy producers need a specific temperature? Öttinger and his team are mainly optimising the carbon fibres to offer the bacteria the perfect surface to settle on. “But it may take some time before we have cleared the biggest hurdles,” Öttinger says.

Carbon fibres have enormous potential, even beyond drinking water treatment. “If someone had told me five years ago that we would be putting carbon fibers into seawater, I probably would have just shaken my head in disbelief,” he says. “And today our research is a great success.”

Öttinger and his team believe that the potential of carbon fibres is far from being exhausted. “Time and again, basic research brings amazing opportunities to light,” he says. “Today we’re definitely laying the foundation for some interesting new applications in the future. You just have to keep at it.” (SV)