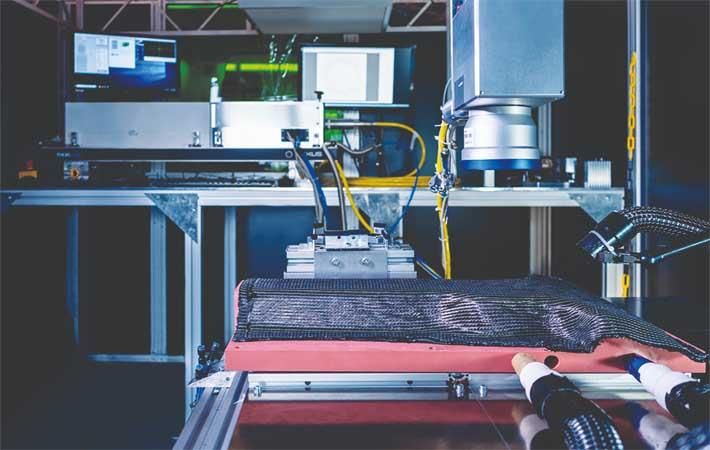 Pic: Fraunhofer Institute's
Fraunhofer Institute for Laser Technology ILT along with four partners has developed a new method for assembling the carbon fibre reinforced polymer (CFRP) components, which saves time by shortening the production process. The method uses an ultrashort pulsed laser to drill holes for fasteners in the textile preform with micrometre-scale accuracy.

Carbon fibre reinforced polymer (CFRP) components are usually assembled using fasteners. These fasteners are typically glued into the CFRP component once it has been cured and drilled. However, integrating the fasteners, as is the case in the new process, in these high-precision cut-outs before the CFRP component is cured saves time by shortening the production process.

The new method has been developed by an ILT-led consortium “CarboLase – Highly productive, automated and tailor-made just-in-time CFRP component manufacturing”. The project received funding from the European Regional Development Fund (ERDF). Its goal was to help establish the North RhineWestphalian SMEs involved in the project as technology leaders and boost their longterm competitiveness on both the national and international stage. The project partners achieved this goal by simplifying the CFRP production process chain and reducing costs.

Carbon fibre-reinforced plastics (CFRP) are one of the most versatile composite construction materials. They combine the positive mechanical properties of their constituent parts – a polymer matrix reinforced with high-strength carbon fibres – to create a solution that offers high strength, high stiffness and low density. However, CFRPs are still struggling to achieve a real breakthrough at a time of increasing concerns about energy and resource efficiency. One reason is their high production costs – and another is the difficulty of machining and processing CFRP components.

The project team developed a CFRP component manufacturing process that checked all the boxes by opting for a three-pronged approach of CNC cutting, laser processing and automated handling. They combined the technologies for these individual process steps in a single robot cell and automated all the steps in between. First, the preform is created by cutting, stacking and assembling the textiles. Next, an ultrashort pulsed (USP) laser drills high-precision cut-outs in the preforms for the metal fasteners.

The USP laser offers a good alternative to conventional manufacturing – but only if the laser is integrated in the robot cell. In a traditional set-up, the ultrashort pulses would be guided to their destination using mirrors, but this is hardly practical on a robot arm. To tackle this problem, experts from Fraunhofer ILT and Amphos worked together to develop a novel technology for coupling the USP laser beam in and out. The USP laser source is connected to the scanner on the robot arm via a hollow core fibre.

On September 26, 2019, the CarboLase consortium won the prestigious CAMX Award in the “Combined Strength” category at the Composites and Advanced Materials Expo in Anaheim, California. The CAMX Awards celebrate innovations that promise to have a major influence on the future of composite materials. The jury was particularly impressed by the project team’s decision to integrate the laser right at the start of the process chain in order to reduce the number of costly and time-consuming steps downstream.

To test the new method and demonstrate its technical feasibility, the project partners produced a demonstrator of a B-pillar component and subjected it to extensive mechanical testing. In a series of both pullout and torsion tests, the joints produced using the CarboLase method performed better than those in CFRP components produced by conventional means. Thanks to the interlocking connection between the inserts and the matrix material, the CFRP components produced using this new method can withstand a maximum pullout force up to 50 per cent higher than conventionally manufactured components with glued-in inserts. Depending on the component design, this improvement in mechanical performance offers the potential to reduce overall component thickness and weight.

The CarboLase method offers designers considerably more creative freedom when it comes to defining fastener size and position. Robots and scanners can move much more freely on both the metre and micron scales than static mechanical machining centers. This paves the way for efficient mass customisation of CFRP components that goes beyond the current state of the art. The dynamic USP laser drilling process is of particular interest for lightweight components in the aerospace and automotive sectors, offering the potential to reduce the process and material costs of CFRP component manufacturing.

Fraunhofer ILT and Amphos pooled their skills to develop the USP laser technology for the CarboLase project. Lunovu was also on board as a system integrator, helping to connect individual process steps and carrying out the integration of the sensors in the robot cell at the Institut für Textiltechnik (ITA) at RWTH Aachen University. Kohlhage Fasteners also played a key role in the project by devising a system for the automated deployment and integration of the inserts. The ITA took charge of implementing the automated process chain for manufacturing laser-machined preforms. The project received some 2 million euros of funding from the European Regional Development Fund (ERDF) over a two-and-a-half year period.

The results of the CarboLase project will be showcased at JEC World 2020, which will take place in Paris from March 3 to 5, 2020.

Fraunhofer Institute for Laser Technology ILT along with four partners has developed a new method for assembling the carbon fibre reinforced polymer (CFRP) components, which saves time by shortening the production process. The method uses an ultrashort pulsed laser to drill holes for fasteners in the textile preform with micrometre-scale accuracy.
Composites