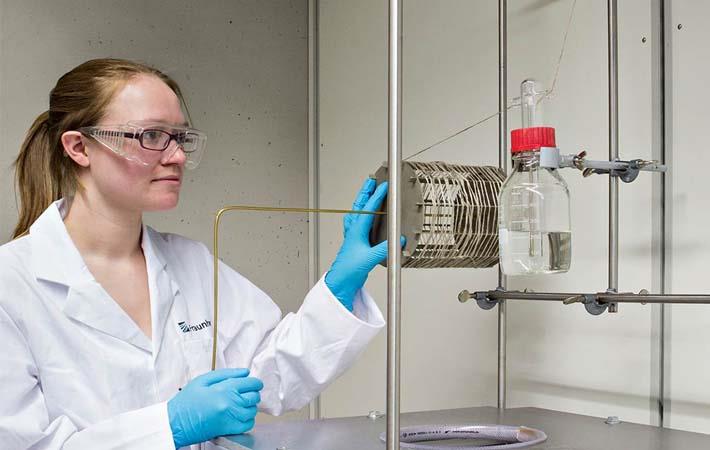 Fraunhofer scientists in collaboration with their partners have been able to combine a special fibre treatment and a yarn technology to make natural fibres moisture repellent, overcoming the disadvantage that natural fibres absorb water very easily which limits their mechanical strength. With this, natural fibres can be fully exploited and used more widely.

One field of application for biological resources is materials – such as natural fibre reinforced plastics (NFRP). Their advantages make them interesting as an alternative to glass and carbon fibre reinforced plastics (GRP or CFRP): they are renewable, biodegradable and robust, use less energy in being produced, are lighter and have better acoustic properties. The disadvantage so far has been that they absorb water very easily, are damaged as a result and lose their otherwise positive mechanical properties.

The Fraunhofer Institute for Structural Durability and System Reliability LBF in Darmstadt, Germany has solved this problem together with the Institute for Textile Technology (ITA) of the RWTH Aachen in the exploratory study "Bastfix", which is funded by the German Federal Ministry of Education and Research (BMBF). Their approach is a clever combination of special fibre treatment and yarn processing.

"A surface treatment of natural fibres with water-repellent layers alone doesn’t provide any progress", explains Dr. Roland Klein, group manager for design of interfaces in the plastics division at the LBF. "The water then continues to penetrate the natural fibre via cut edges or other damage."

For this reason, the scientists have treated the fibres so that they are moisture-repellent on the inside. They did this by producing polymers inside the natural fibres. "First, we let the monomers of the plastic penetrate into the cavities of the natural fibres. The polymerisation then took place directly inside the fibres," Klein says. The use of the method is particularly interesting for thermoplastic fibre composites, since in their production, the molten polymer is very viscous, does not penetrate into the interior and only wets the fibres superficially. The advantage of thermoplastics: they can be deformed as desired even after production.

In their experiments, the researchers used flax fibres in the form of a roving, the state before spinning into yarns and their further processing into textile surfaces. This has the advantage that the fibres can be completely soaked with the monomer, since they are still present individually. Complete impregnation might not be guaranteed on fabric or twisted yarn. This is where the yarn process of the ITA comes into play. In the wrap spinning process, the Aachen scientists arrange the natural fibres in parallel and wrap the parallel core of the flax fibres with a filament. The advantage is that the fibres are not twisted, which gives them increased strength.

"By combining both processes, the physical properties of natural fibres can be fully exploited. These two developments greatly expand the area of application for NFRP, with the result that they can also be used outdoors and in highly stressed components," says Klein in describing the added value. So far, NFRPs are used mainly in cars, such as for the interior lining of doors.

For his research, Klein and his team received the "DNFI Innovation in Natural Fibres Award 2017". Fifteen textile organisations had founded the Discover Natural Fibres Initiative (DNFI) after the 2009 United Nations International Year of Natural Fibre. (SV)