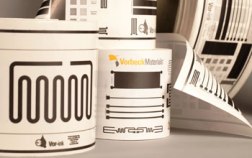 Nanotechnologies exist in the realm of billionths of a meter, with tolerances that push the limits of manufacturing--so it can be hard to imagine a factory that can turn out such products on a commercial scale.

And yet, the United States has created the right environment for nano manufacturing to succeed here with its strong foundation in basic research and development, a skilled workforce and private and public investment support.
One nanotechnology--graphene--is relatively new to the nano manufacturing sector, and NSF Small Business Innovation Research grantee Vorbeck Materials of Jessup, Md., is at the forefront of efforts to bring graphene technology to the marketplace.

Graphene--tiny sheets of carbon only one atom thick--materialized as a concept from research laboratories in the 1980s, but researchers only isolated the sheets as a unique two-dimensional material in 2004. Recently, graphene has emerged as a nanotechnology prized for its ability to conduct electricity and its exceptional durability and strength.

According to researchers at Vorbeck, the company's Vor-ink graphene-based conductive ink for electronics was first introduced at the Printed Electronics Europe 2009 tradeshow and was directly marketed and sold to customers there--making it one of the first (if not the first) graphene products to go to market.

Vor-ink is a type of conductive ink that allows circuits to be drawn or printed on a variety of substrate materials including paper, paperboard, and polymer films. When compared to traditional industrial standards, it is a more economical way to lay down modern printed circuit boards that are common in today's computer-enabled world.

Now, Vorbeck has announced plans for a second graphene factory in Pocomoke City, on Maryland's Eastern Shore, and they are expanding capacity at their existing Jessup production plant.

In January, Vorbeck demonstrated its technology at the 2013 International Consumer Electronics Show (CES) in Las Vegas, Nev., as part of the Eureka Park Tech Zone. Read more in the press release from NSF and see a video from AOL.

Vorbeck is adding to that growth with graphene products developed in part with the support of Phase I and Phase II National Science Foundation Small Business Innovation Research (SBIR) grants, U.S. Army SBIR contracts (contract 1 and contract 2), and private investment.