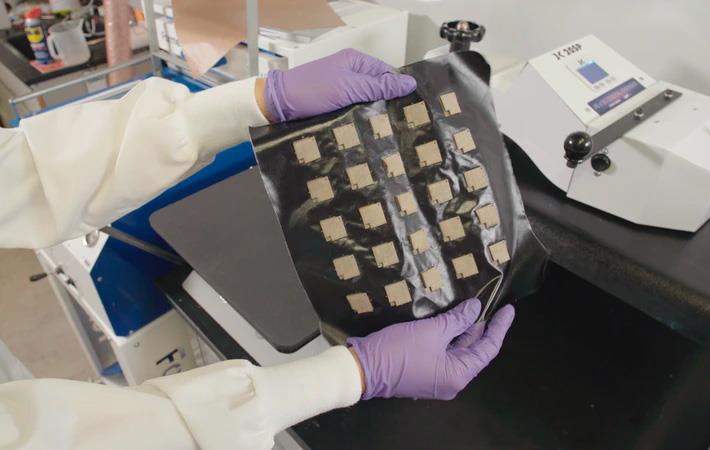 The research has been carried out by a highly multidisciplinary team of researchers from Harvard University’s Wyss Institute for Biologically Inspired Engineering, John A Paulson School of Engineering and Applied Sciences (SEAS), and Department of Chemistry and Chemical Biology.

The research is published in Advanced Materials Technologies.

Soft robots are on the rise largely because of their ability to interact with and conform to the human body in ways that stiff and rigid robots cannot. As wearable devices that often use specially engineered fabrics, soft robots are starting to become the basis for new rehabilitation therapies, or as enhancements that protect wearers while they perform strenuous tasks. Meanwhile, as non-wearable but independently functioning devices, textile-based soft robots could enable new mechanotherapies to help tissues such as muscles and their activating nerve fibres repair damage, or prevent damage to them in the first place by applying physical forces at the right frequency in precise locations.

Besides specialised fabrics, textile-based soft robots need “actuating” and “sensing” systems that, respectively, induce their motions and allow them to literally feel their own state and the environments they interact with. So far, the majority of textile-based soft robots are pneumatically actuated, which means that they are tethered via bulky tubing to external, often noisy compressors that modulate air-pressure within them so they can change their structures and motions.

The team was led by Wyss Institute associate faculty member Conor Walsh, who also is the Paul A Maeder Professor of Engineering and Applied Sciences at SEAS, and the founder of the Harvard Biodesign Lab. Walsh and his group, with their fundamental work, have developed a number of soft, textile-based wearable robots for biomedical and other applications.

“Our aim was to engineer robotic fabrics that can electronically sense and actuate, use integrated closed-loop feedback control to regulate themselves, and be manufactured in arbitrary shapes and large batches,” said co-first author Vanessa Sanchez, a graduate student working in Walsh’s group at the Wyss Institute and SEAS who joined the team with a background in engineering and fashion design. “STATs embody all of these features. As lightweight and unobtrusive smart fabrics, we believe they could enable a new range of robotic approaches.”

To develop their textile-embedded actuation mechanism, Walsh’s team collaborated with Wyss associate faculty members Robert Wood and George Whitesides. Wood and his group brought their broad expertise on non-wearable soft robots and innovative manufacturing techniques to the project, while Whitesides’ group had created a deep understanding of fluidic systems, adaptive materials, and their self-regulating properties that, together, became key to the development of STATs. Wood is also the Charles River Professor of Engineering and Applied Sciences at SEAS, and Whitesides the Woodford L and Ann A Flowers University Professor at Harvard University.

The researchers manufactured STATs as tightly sealed pouches using a commercially available woven textile membrane coated with a layer of heat-sealable thermoplastic polyurethane and incorporating embedded electrically active components. By dynamically powering STATs’ electric components, an enclosed engineered fluid known as Novec 7000 is vaporised by heat and expands its volume up to 100-fold, allowing the robotic textiles to increase and decrease their internal pressure over a significant range.

“To be able to actuate these pressure changes in a programmable fashion and allow the system to regulate itself, we manufactured electronically-conductive silver-plated threads into the fabric that form the textile-based heater and sensor elements and enable the desired temperature and pressure control inside the pouches,” said co-first author Christopher Payne, a research associate working closely with Sanchez on Walsh’s team. “With an integrated ‘closed-loop feedback’ controller, STATs autonomously maintained their pressure even when placed into environments in which the exterior temperature fluctuates, like close to an air tube that actively cools the system.”

The team’s STATs could generate peak pressures around 75 kPa at room temperature, which roughly equals the pressure of a FIFA regulation soccer ball or the pressure inside an Instant Pot pressure cooker. Moreover, they configured arrays of STATs, in which individual STATs in, for example, a 3×3 arrangement could be actuated in programmed patterns. The interconnected STATs were able to maintain their pressure profiles independently of the others, and under the pressure of an external weight.

“STATs overall capabilities, a fabrication path that combines tried-and-tested manufacturing techniques enabling us to design STATs with arbitrary geometries in bulk, and their water-resistance and long lifetime under stress, make them highly suitable for a wide number of applications,” said Walsh. “They could be utilised in mechanotherapeutic wearables that, by applying defined pressure patterns, could accelerate tissue repair, in responsive cushions that could help prevent pressure sores in wheelchair or hospital bed-bound individuals, or even as dynamic garments in the fashion industry, only to name a few.”

“These STAT robotic textiles emerged through a wonderful self-assembled collaboration involving multiple Wyss teams who have been able to leverage their multidisciplinary expertise to overcome a central bottleneck in robotic engineering. They have created an entirely new solution to the human-robot interface challenge, which can transform industrial robotics and change the way physical rehabilitation therapies are carried out in the future,” said the Wyss Institute’s founding director Donald Ingber, who is also the Judah Folkman Professor of Vascular Biology at Harvard Medical School and the Vascular Biology Programme at Boston Children’s Hospital, as well as Professor of Bioengineering at SEAS.