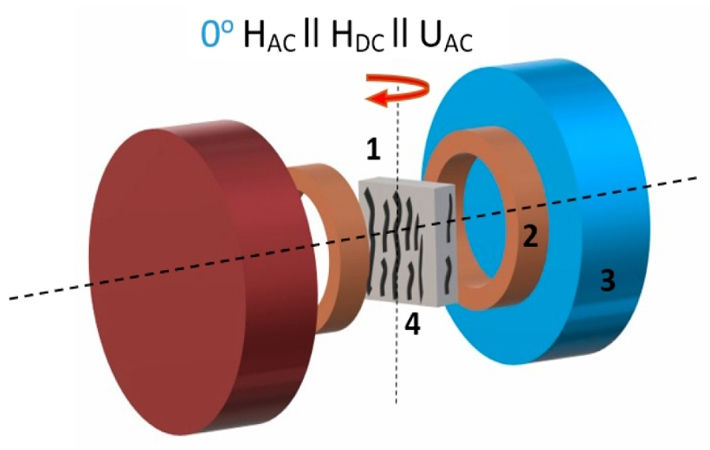 Polymer composite materials that combine magnetic and electrical properties have the ability to convert electric polarisation into a magnetic field and vice versa. Although some materials exhibit a much better magnetoelectric effect, polymer-based composites are easier not only to produce but also to modify.

Such composites have potential use in a variety of areas. For example, using them as a basis, scientists can develop surfaces that help cultivate various cells. In this case, polymer composites serve as a substrate through which it is possible to affect the culture using a non-contact and controlled electric charge and morphological properties of the surface. It allows simulating natural conditions in the body. Keeping their potential in mind, scientists have been trying to improve the efficiency of these materials.

Immanuel Kant Baltic Federal University produced two types of composites based on poly(vinylidene fluoride) (PVDF) polymers and a PVDF-based copolymer with the use of PVDF-TrFE trifluoroethylene.

Poly(vinylidene fluoride) is a multipurpose material with a variety of applications. In a certain crystalline phase, it possesses piezoelectric properties that are expressed in the emergence of electrical polarisation under the mechanical influence. Composites developed by the researchers demonstrate a change in polarisation both under mechanical impact and the influence of a magnetic field due to the inclusion of magnetic nanoparticles in the polymer structure.

The team followed various approaches to modify nanocomposites in order to amplify and control the magnetoelectric response. It used a PVDF-based copolymer with extra pronounced piezoelectric properties, then tried additives from piezoelectric and magnetic particles. Scientists found that addition of particles of barium titanate (BaTiO3) with a concentration of 5-10 per cent can significantly enhance the magneto-electric effect.

"We have also shown that our composites are biocompatible, that is, they do not harm living systems. This was confirmed in our experiment with the embryonic stem cells of mice. This type of cell is very sensitive to the conditions of cultivation, including the properties of the substrate. Further research will be aimed at increasing the magnetoelectric effect. This is possible due to changes in the size, shape, and concentration of particles in such composites," said Kateryna Levada, head of the Biomedical Applications Laboratory of the REC "Smart Materials and Biomedical Applications".

Scientists at I Kant Baltic Federal University have produced new polymer nanocomposites with improved magnetoelectric properties. Polymer composites combine magnetic and electrical properties, and are being explored for various applications. Though some materials show better magnetoelectric effect, polymer-based composites are easier to produce and modify.
Composites