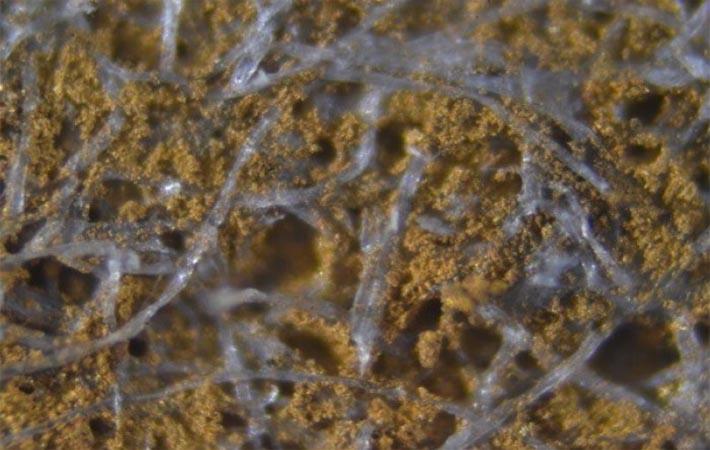 Courtesy: Imperial College London
A multidisciplinary team of scientists from Imperial College London has developed technology to print metals such as silver, gold and platinum onto natural fabrics and shown that it could be used to incorporate batteries, wireless technologies and sensors into fabrics like paper and cotton textiles. This may be used in clothing for monitoring health.

Scientists says ultimately these technologies could be used for new classes of low-cost medical diagnostic tools, wirelessly powered sticker-sensors to measure air pollution or clothing with health monitoring capabilities. The research was led by Dr. Firat Güder from the Department of Bioengineering.

The team involved researchers from the Departments of Bioengineering, Chemistry and Physics at Imperial. The research was funded by the Wellcome Trust, the Engineering and Physical Sciences Research Council (EPSRC) and the Royal Society.

Metals have been printed onto fabrics, but until now the process has essentially coated the fabric with plastic which renders the fabric waterproof and brittle.

Published in Advanced Functional Materials, the research paper describes how a new approach would allow metal inks to cover entire fibres rather than simply coating the surface of the fabric.

Max Grell, first author on the paper and PhD candidate from the Department of Bioengineering at Imperial, said: “Fabrics are ubiquitous and some forms such as paper, are ancient. With this new method of metallising fabrics it will be possible to create new classes of advanced applications.”

To coat the fibres, the researchers first covered them in microscopic particles of silicon, and then submerged the material into a solution containing metal ions. This preparatory process, known as SIAM (Si ink-enabled autocatalytic metallisation), allows metals to ‘grow’ throughout the material as the ions are deposited on the silicon particles.

This approach coats metal throughout the fabric, allowing paper and textiles to maintain their ability to absorb water and their flexibility alongside providing a large metallic surface. These properties are important to the functioning of many advanced technologies, particularly sensors and batteries, where ions in solution must interact with electrons in metals.

For their proof-of-concept study, the research team dropped the silicon ink by hand onto the fabrics, but say the process could be scaled up and performed by large conventional printers.

Having proven that the method works, the researchers demonstrated its ability to fabricate the elements required for some advanced technologies. For example, they created silver coil antennas on paper, which can be used for data and power transmission in wireless devices such as Oyster cards and contactless payment systems. The team also used the method to deposit silver onto paper and then added zinc onto the same paper to form a battery.

The new approach was also used to produce a range of sensors. This included a paper-based sensor to detect the genetic indicators of a disease that is fatal to grass-eating animals (Johne’s disease) and associated with Crohn’s disease in humans.

According to the researchers, sensors fabricated within natural fabrics would be cheaper, easy to store and transport, and ultimately could be used in clothing that monitors health.

“We chose applications from a range of different areas to show how versatile and enabling this approach could be,” said Grell. “It involved a lot of collaboration and we hope we have demonstrated the potential of this method so people who specialise in different areas can then develop these applications.”

Grell added: “The beauty of this approach is that it can also combine different technologies to serve a more complex application, for example low-cost sensors can be printed on paper that can then transmit the data they collect through contactless technology. This could be particularly useful in the developing world where diagnostic tests need to be conducted at the point of care, in remote locations and cheaply.”

The affordability of this method was cited as one of its major advantages by the researchers, who demonstrated that when using their approach a coil antenna could cost as little as $0.001 to manufacture, compared to $0.05 using current methods.

With the support of Imperial innovations, the team has applied for a patent and is now looking for industry partners. The next step will be to demonstrate the use of the new method in real-life applications, which will require prototype development, testing and optimising. (SV)

EconCore and Covestro working together