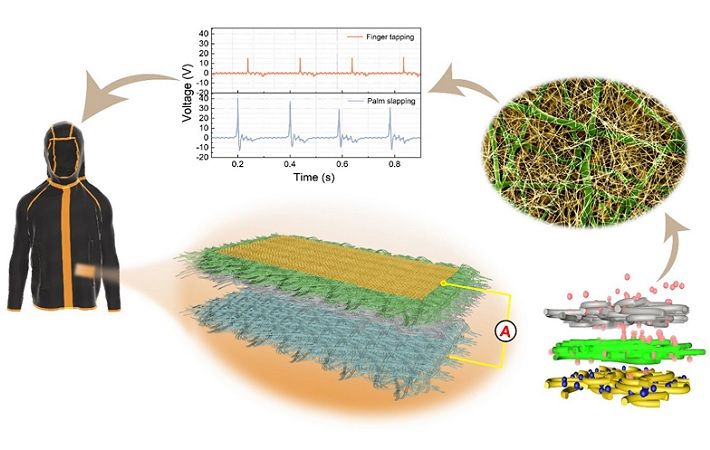 Pic: ScienceDirect
Scientists from the University of Fukui in Japan and China’s Nanjing University have created a new triboelectric fabric that generates electricity from the movement of the body while remaining flexible and breathable. Work on triboelectric nanogenerators (TENGs) may soon make using the movement of a body to charge electronic devices like phones a reality.

Triboelectric effect is a phenomenon where a charge is generated on two dissimilar materials when the materials are moved apart after being in contact with each other. TENGs use this effect to convert mechanical motion into electrical energy. The compactness of TENGs allows them to be used as wearable devices that can harness the motion of the body to power electronics.

Most current TENGs are not breathable, making them uncomfortable to wear. The team of researchers has developed a multilayered TENG made from electrospun fibres, silver nanowires and a polystyrene charge storage layer that not only has a high electrical performance, but also has superior wearability, according to a press release from the Japanese university.

Being wearables, the emphasis is placed on the fabric properties (such as the comfort of the material) and the charge-carrying capacity of the nanogenerators. Generally, the triboelectric materials chosen for the nanogenerator should be safe, compatible with the human body (biocompatible), flexible and breathable while being able to maintain a high electrical output performance.

Among the many materials considered for TENGs, electrospun fibres are a promising candidate as they are lightweight, strong and have desirable electrical properties. Electrospinning is a technique by which solutions of polymers are drawn into fibers using electrical charge.

There are ongoing efforts to add metals to electrospun fibres to improve the electrostatic potential and charge-trapping capabilities. But this has led to compromises being made between the comfort and the output performance of the material.

In a recent study published in Nano Energy, the team of researchers reported developing the all-fibrous composite layer TENG (AF-TENG) that can easily be integrated with normal cloth.

The mechanical motion of the body while walking or running causes the triboelectric layers to gain a charge. This way, the mechanical energy is converted into electrical energy, which can be used to power electronic devices.

The researchers used the AF-TENG to light up 126 commercial LEDs each rated at 0.06 Watt, demonstrating the feasibility of the nanogenerator.

While TENGs are currently limited to power low-powered devices such as LEDs and calculators, improvements to the wearability and output performance are integral steps towards future wearable technology.