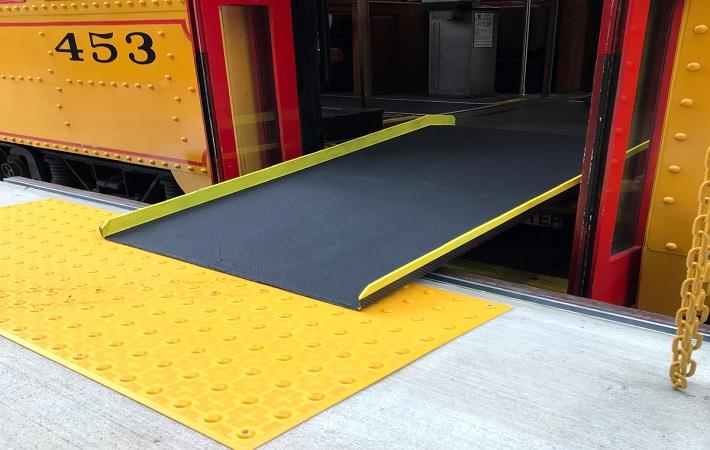 Pic: Memphis Area Transit Authority
The Memphis Area Transit Authority (MATA), the public transport provider for the Memphis area, has decided to use new service ramps, made of a lightweight, super strong composite material used to reinforce concrete buildings and bridges, on its rail trolley cars. The ramps are more than 60 per cent lighter than the metal ramps, and are three times stronger.

These new composite ramps bridge the gap between the rail trolley and station boarding platform area, and are easily lifted and put into place by trolley operators at specific stops. The material, referred to as carbon fibre reinforced polymer (FPR), is popular with structural engineers tasked with repairing the nation’s aging infrastructure. FRP is used for strengthening buildings, bridges and bridge columns, marine ports, and other vital structural repairs.

“The use of carbon fibre instead of glass fibre will provide the rail trolley ramps even more strength and durability over other standard materials while remaining a lighter weight solution as compared to traditional metal service ramps,” said Fran Sosa, supervising bridge engineer for Nashville-based WSP USA, the consulting engineers on the project.

The ease of handling for the ramps when the rail trolleys stop to board customers promotes both employee and public safety and represents a safer way to load and offload. The ramps are also compliant with the Americans with Disabilities Act (ADA) and allow for safer, more secure loading of wheelchairs, walkers and other assistance devices.

“This is another application of FRP that benefits the public,” said Mo Ehsani, president and CEO of Tucson-based QuakeWrap and Centennial Professor Emeritus of Civil Engineering at the University of Arizona. “The weight of these ramps was a primary concern to MATA. Our unique design led to each ramp weighing only 25 pounds, while exceeding the strength and deflection requirements set by the client.”

The first carbon FRP ramp used by MATA is designed specifically for rail Trolley Car 453, a double-truck replica of a Birney, a type of streetcar that was manufactured in the United States in the 1910s and 1920s. The original design was small and light, intended as an economical means of providing frequent service at a lower infrastructure and labour cost than conventional streetcars.

Serving as an on-call engineering consultant to the MATA Trolley Division, WSP USA reached out to QuakeWrap for the design and fabrication of the carbon FRP ramps. QuakeWrap is the original company to patent the use of FRP for structural engineering rehabilitation, and the ramps are made at its 8,000 square-foot manufacturing site in Arizona.

Ehsani has spent more than 25 years pioneering use of FRP for reinforcement and strengthening of columns and buildings to prevent their catastrophic failure during earthquakes, which led to the founding of QuakeWrap in 1994. Since then, Ehsani and QuakeWrap have become the authority on using FRP for infrastructure repair, including its use on large underground pipelines for storm and sewers, at major commercial ports for concrete piers and commercial seawalls, in mines and other highly corrosive environments.

FRP’s ease of installation relative to the cost and energy of replacing an entire structure represents an economical means of repairing or rehabilitating infrastructure with minimal service interruption.

The Memphis Area Transit Authority (MATA), the public transport provider for the Memphis area, has decided to use new service ramps, made of a lightweight, super strong composite material used to reinforce concrete buildings and bridges, on its rail trolley cars. The ramps are more than 60 per cent lighter than the metal ramps, and are three times stronger.
Construction Textiles