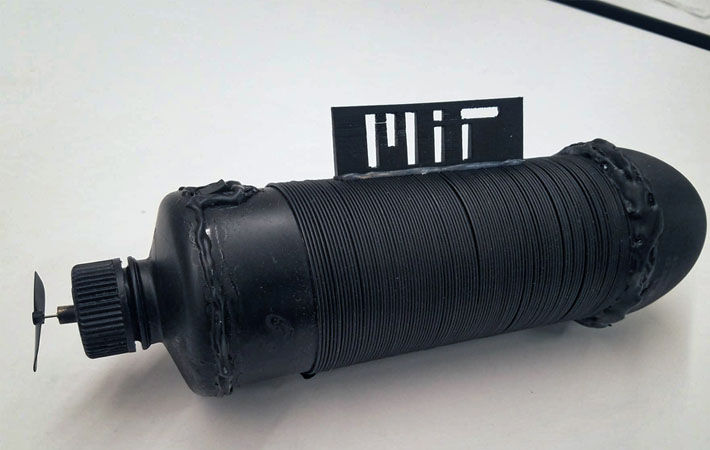 Pic: Massachusetts Institute of Technology
Researchers at the US Massachusetts Institute of Technology have developed a rechargeable lithium-ion battery in the form of an ultra-long fibre that could be woven into fabrics. The battery can enable a wide variety of wearable electronic devices, can be used to make 3D-printed batteries in any shape and opens possibilities for self-powered communications, sensing and computational devices, some of whose batteries could also double as structural parts.

In a proof of concept, the team behind the new battery technology has produced the world’s longest flexible fibre battery—140 metres long—to demonstrate that the material can be manufactured to arbitrarily long lengths. The work was mentioned in the journal Materials Today.

Researchers have previously demonstrated fibres that contain a wide variety of electronic components, including light emitting diodes (LEDs), photosensors, communications, and digital systems. Many of these are weavable and washable, making them practical for use in wearable products, but all have so far relied on an external power source. This new fibre battery, which is also weavable and washable, could enable such devices to be completely self-contained, according to an MIT press release.

US researchers have developed a rechargeable lithium-ion battery in the form of an ultra-long fibre that could be woven into fabrics. The battery can enable a wide variety of wearable electronic devices, can be used to make 3D-printed batteries in any shape and opens possibilities for self-powered communications, sensing and computational devices.

The new fibre battery is manufactured using novel battery gels and a standard fibre-drawing system that starts with a larger cylinder containing all the components and then heats it to just below its melting point. The material is drawn through a narrow opening to compress all the parts to a fraction of their original diameter, while maintaining all the original arrangement of parts.

While others have attempted to make batteries in fiber form, Khudiyev said those were structured with key materials on the outside of the fiber, whereas this system embeds the lithium and other materials inside the fiber, with a protective outside coating, thus directly making this version stable and water-proof. This is the first demonstration of a sub-kilometre-long fibre battery which is both sufficiently long and highly durable to have practical applications, he said.

A demonstration device using the new fiber battery incorporated a ‘Li-Fi’ communications system—one in which pulses of light are used to transmit data, and included a microphone, pre-amp, transistor, and diodes to establish an optical data link between two woven fabric devices.

The 140-meter fibre produced so far has an energy storage capacity of 123 milliamp-hours, which can charge smartwatches or phones, he says. The fiber device is only a few hundred microns in thickness, thinner than any previous attempts to produce batteries in fibre form.

The team has already applied for a patent on the process and continues to develop further improvements in power capacity and variations on the materials used to improve efficiency. Khudiyev says such fiber batteries could be ready for use in commercial products within a few years.