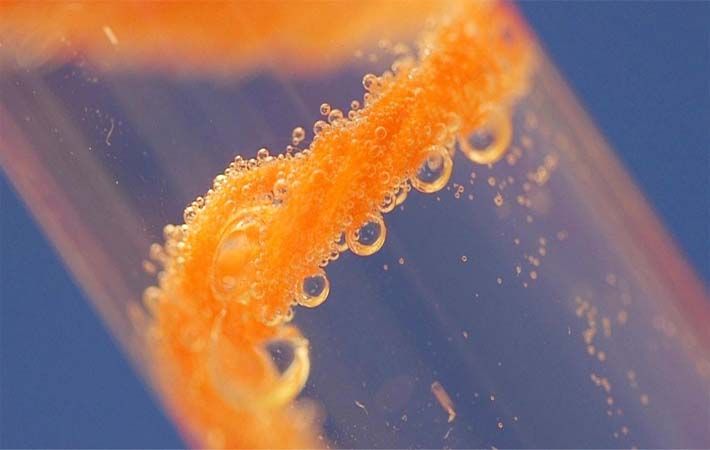 Pic: North Carolina State University
Scientists at the North Carolina State University have been able to coat cotton yarns with enzymes, substances which speed up chemical reactions, and change hydrogen peroxide into oxygen and water. The study is a step towards creating a new generation of chemical filters. They are already designing textile filters to capture carbon dioxide, a greenhouse gas.

The scientists are studying whether they can design textile filters that could serve as a carbon capture technology. They are working on coating textiles with carbonic anhydrase, an enzyme that can turn carbon dioxide, a greenhouse gas, into water-soluble baking soda. The study has been reported in the journal Advanced Materials Interfaces.

“The catalase system we described in the publication, although we can use it for real applications, mostly we were using it as a model to see if we could attach an enzyme to a textile, and show the reaction works,” said the study’s corresponding author Sonja Salmon, associate professor in textile engineering, chemistry and science at NC State. “We all know that carbon dioxide emissions are a big problem. What if we could make a filter for it like your body does when you breathe?”

“Catalase is actually a very important enzyme in your body. It degrades hydrogen peroxide, which can form naturally. Your body makes catalase to destroy the peroxide before it can harm you,” Salmon said and added “In our study, catalase was our model system. We used a gel-like material called chitosan to stick the catalase to yarns, and then showed we could use them to change hydrogen peroxide into water and oxygen.”

This study has implications for industrial processes. In the textile industry, peroxide is used to bleach cotton. “If you wanted to reuse that same water for another process where the bleach would be damaging, you could use our biocatalytic textile as a filter to clean the peroxide out of the water,” Salmon said.

Salmon said the real target was to use carbonic anhydrase, enzyme which helps in moving carbon dioxide out of cells so that it can be exhaled.

“What if we could make a filter with this enzyme to filter gas from a power plant? Carbon dioxide is a greenhouse gas, produced by burning fuel. To keep it from entering the atmosphere, we need to selectively pick out the carbon dioxide molecules from power plant emissions, and let other harmless gases go. These enzymes are very selective. They’re only going to react with carbon dioxide to very quickly turn it into bicarbonate, which immediately dissolves in the process liquid. This captured carbon dioxide then would go to a separate process where bicarbonate is removed and the liquid is recycled. If you don’t have a system to trap CO2, it becomes very difficult to remove it from emissions. We’re working to show that the technology we’re developing could be a useful tool in the fight against climate change,” Salmon said.

Scientists at the North Carolina State University have been able to coat cotton yarns with enzymes, substances which speed up chemical reactions, and change hydrogen peroxide into oxygen and water. The study is a step towards creating a new generation of chemical filters. They are already designing textile filters to capture carbon dioxide, a greenhouse gas.
Smart Textiles

US company Hexion to increase production at Portland site