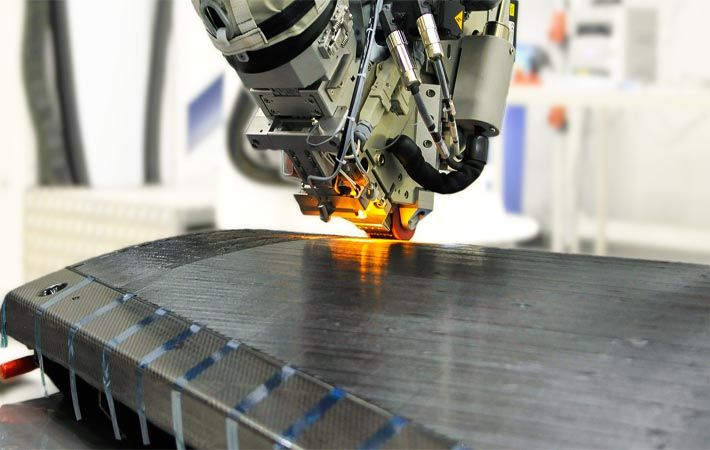 As Europe tries to work on the climate crisis, the EU has begun to rollout several programmes aimed at challenging the status quo in nearly every domain, with the goal to enhance sustainability and mitigate carbon footprint. For the aerospace industry, the Clean Sky 2 initiative with its multifunctional fuselage demonstrator (MFFD), aims to go straight to the source and challenge the very construction of aircraft – looking to see how a transition from traditional aluminium to next-gen carbon-fibre reinforced composites can not only improve the structure, but also greatly reduce emissions.

Looking to take a leading role within the MFFD framework and share their expert knowledge of composite materials, Royal NLR, together with collaborators GKN Fokker (lead), TU Delft, and Germany’s Diehl, have taken on their own project called Stunning. Their goal is to demonstrate and validate how the use of composites, namely thermoplastics, can help realise a next-gen fleet of aircraft capable of offering the same strength and durability of steel and aluminium, while drastically reducing the total time of production and maintenance activities, as well as the overall weight of aircraft and the subsequent emissions.

“Probably half of the aerospace industry in Europe is involved in the MFFD project, as we really dig into researching various manufacturing techniques all with sustainability in mind,” describes Joachim de Kruijk, senior R and D composites engineer at NLR. “In researching the various manufacturing options and materials, we believe the best way to achieve this goal of a more sustainable fuselage structure is to utilise the new generation of thermoplastic materials. We see that such a material can enable a change in manufacturing approach and design techniques that can result in much lighter aircraft, which means less fuel burn and lower emissions of CO2 and NOX – all while maintaining the strength and safety we expect from traditional aluminium aircraft.”

A number of modern aircraft, such as the Airbus A350 XWB and the Boeing 787 Dreamliner already use composite materials, known as thermosets, in the construction of parts and brackets and even the skin of the fuselage. In the Stunning project, however, the experts at GKN Fokker and NLR were tasked with the design for manufacturing, enabling high production rates of large and structural parts for planes.

“One of the real improvements offered by the use of thermoplastics is that during the manufacturing and assembly process, unlike thermosets, this material can be heated and reheated multiple times to ensure uniformity and bonding,” explains De Kruijk. “In Stunning, one of our objectives was to show how the different processes could be combined to build both structural and non-structural components for complete integration. To do this, we set out to build the entire bottom half of a fuselage to gain insights not only in manufacturability of the skin of the aircraft, but also the sub structures like the stiffeners for under the skin, and other structural pieces like floor beams, as well as parts of the cabin, the systems, and even cargo doors.”

With these goals in mind, collaborators set out to test their various manufacturing techniques to build the numerous parts and structures to be integrated into a fuselage. For NLR, this meant testing its knowledge and production abilities with the biggest part of them all, the underbelly of the fuselage structure. With the help of its in-house, state-of-the-art automated fibre placement machine, NLR hit its target, building the bottom half of fuselage skin – a single piece, measuring in at 8.5 meters long by 4 meters in diameter – the largest known single thermoplastic piece ever made in the world.

While composite materials like thermosets have been increasingly used in airplane construction, large thermoplastic parts are relatively new to the field, which means it can be a little more costly. But according to De Kruijk, the benefits greatly outweigh the price.

“Because it’s newer and due to its properties, thermoplastics are a little more expensive than thermosets. But there are a number of differentiating factors that make the use of the new material worth it. For instance, thermoplastics are a little lighter than thermosets because it’s a tougher matrix material and has a better resistance to impact damage, which is important,” explains De Kruijk. “Beyond that, however, is the means by which the material can be utilised in manufacturing. To connect various parts or pieces of thermoplastics, you simply need to heat the material to weld it together. That means we’re getting rid of the hundreds of thousands of the fasteners holding conventional planes together, which will undoubtedly lead to a an even more dramatic savings in weight.”

Another topic that NLR has been tasked with researching is how to inspect, maintain and repair aircraft constructed from thermoplastics. As of now, the use of large composite parts in planes is somewhat limited, which means there’s much less data and practice in inspection, maintenance and repairability.

“Currently, we’re working on developing technology for a number of non-destructive inspection (NDI) techniques to use to inspect planes, such as thermography and shearography, but that technology is still maturing. Currently, we employ ultrasonic inspection to check for defects and issues, but that can be a time-consuming process,” suggests De Kruijk. “However, current inspection and maintenance of conventional aircraft is also slow. Because of the nature of thermoplastics, with the ability to be reheated and welded together, we see that maintenance can be done much faster than on traditional aircraft. Just imagine how much time can be saved by not having to hand check every single rivet across the entire structure, individually.”

Due to the size of the final skin, two segments were produced. With the completion of the lay-up of the second 90 degree segment of the lower fuselage skin, the next step is to consolidate and to join the two 90 degree segments of the lower fuselage skin to a 180 degree fuselage skin segment. This requires a very large autoclave that is capable of both fitting and heating the over-sized pieces to join them together. Because there is no such autoclave in the Netherlands, the two halves are headed to Germany for integration. However, in the midst of the COVID-19 pandemic and travel restrictions, this step of the project has been delayed multiple times. Currently, the process is slated to take place end of June.

“Assuming we can push forward with connecting these two pieces of the fuselage in June, we expect that we can have the consolidated skin back at NLR by summer to start the detailed NDI process to test and see verify its success and thoroughly establish the quality of the complete lower fuselage skin,” says De Kruijk. “After that, we will ship it to our partners at GKN Fokker, where the various parts that were developed in the Stunning project can be fully assembled and integrated.”

NLR has built the largest known single thermoplastic piece for bottom half of the fuselage structure for The Clean Sky 2 Multifunctional Fuselage Demonstrator (MFFD), part of the EU's Clean Sky 2 initiative. Through the Clean Sky 2 initiative, the aerospace industry is looking to transition from aluminium to next-gen carbon-fibre reinforced composites.
Aerospace Textiles