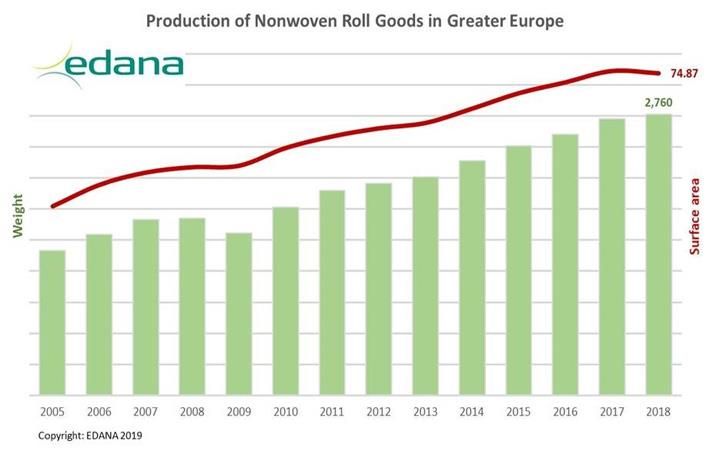 Pic: Edana
The overall production of nonwovens in Europe grew by 1.3 per cent in 2018 to reach 2,760,000 tonnes, according to the annual European statistics for 2018 released recently by Brussels-based EDANA, an international association for the nonwovens and related industries. The annual average growth rate has been nearly 4 per cent over the last decade, it said.

Despite a slowdown in some important market segments and increasing competition from abroad, the European nonwovens industry showed again its strength, resilience and ability to innovate, said EDANA’s market analysis and economic affairs director Jacques Prigneaux in a press release.

Diverging trends can be observed in different European countries and between the various production processes of nonwovens.

Overall spunmelt output was almost flat (+ 0.9 per cent over 2017), while drylaid technologies recorded an increase of 2.1 per cent. The highest apparent growth within drylaid production (in tonnes) was observed in air-through and hydroentanglement bonding processes, with respectively + 7.6 per cent and + 4.7 per cent.

The hygiene market, still the main end-use for nonwovens by volume, grew by 1.7 per cent in 2018, following a growth of 2.7 per cent in 2017. The main driver of this increase was the development observed in the incontinence market.

The most meaningful developments in tonnage for nonwovens in 2018 were in sales of roll goods for personal care wipes (+2.9 per cent), floor covering (-1.2 per cent), civil engineering (-0.3 per cent), automotive interior (-0.5 per cent), electronics (+2.8 per cent) and food & beverage applications (+5.7 per cent). However, these figures do not take into account specific grammage evolutions, which are available to EDANA members thanks to figures in surface area. (DS)