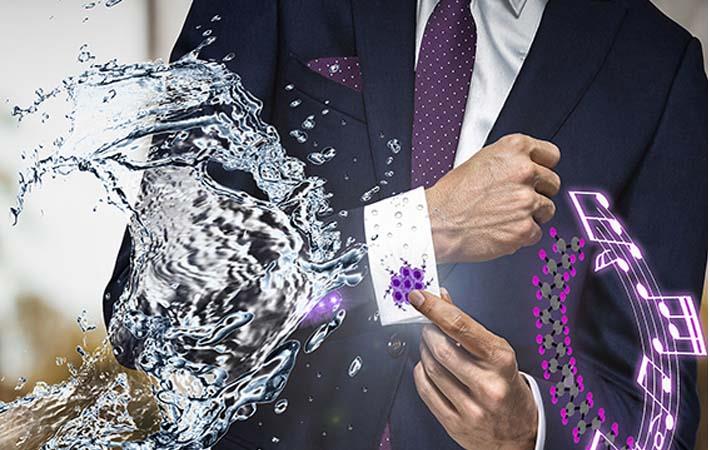 “It is the first time there is a technique capable to transform any existing cloth item or textile into a self-powered e-textile containing sensors, music players or simple illumination displays using simple embroidery without the need for expensive fabrication processes requiring complex steps or expensive equipment,” said Ramses Martinez, an assistant professor in the School of Industrial Engineering and in the Weldon School of Biomedical Engineering in Purdue’s College of Engineering.

The technology is featured in the July 25 edition of Advanced Functional Materials.

“For the first time, it is possible to fabricate textiles that can protect you from rain, stains, and bacteria while they harvest the energy of the user to power textile-based electronics,” Martinez said. “These self-powered e-textiles also constitute an important advancement in the development of wearable machine-human interfaces, which now can be washed many times in a conventional washing machine without apparent degradation.”

Martinez said the Purdue waterproof, breathable and antibacterial self-powered clothing is based on omniphobic triboelectric nanogeneragtors (RF-TENGs) – which use simple embroidery and fluorinated molecules to embed small electronic components and turn a piece of clothing into a mechanism for powering devices. The Purdue team says the RF-TENG technology is like having a wearable remote control that also keeps odours, rain, stains and bacteria away from the user.

“While fashion has evolved significantly during the last centuries and has easily adopted recently developed high-performance materials, there are very few examples of clothes on the market that interact with the user,” Martinez said. “Having an interface with a machine that we are constantly wearing sounds like the most convenient approach for a seamless communication with machines and the Internet of Things.”

The technology is being patented through the Purdue Research Foundation Office of Technology Commercialisation. The team is now looking for partners to test and commercialise the technology. Their work aligns with Purdue's Giant Leaps celebration of the university’s global advancements in artificial intelligence and health as part of Purdue’s 150th anniversary. It is one of the four themes of the yearlong celebration’s Ideas Festival, designed to showcase Purdue as an intellectual centre solving real-world issues. (SV)