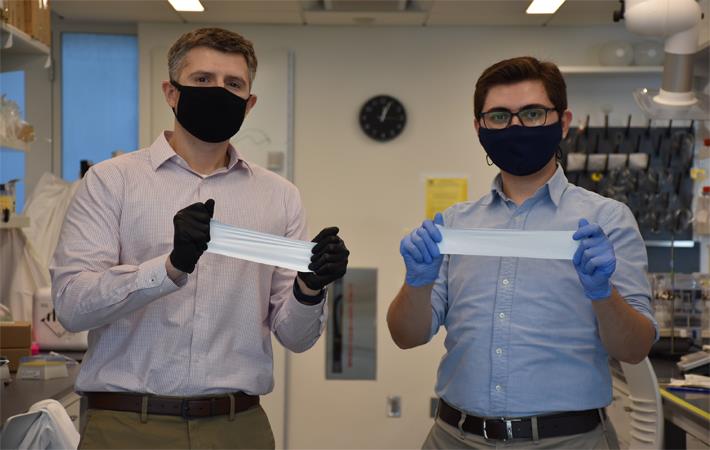 Pic: University of Rhode
Scientists at the University of Rhode Island have devised a continuous, non-invasive way to detect and monitor infections in wounds by embedding nanosensors in the fibres of a bandage. The team has used single-walled carbon nanotubes in the bandage which will be able to identify an infection in the wound by detecting concentrations of hydrogen peroxide.

The research has been carried out by Assistant Professor Daniel Roxbury and former URI graduate student Mohammad Moein Safaee, and published in the journal Advanced Functional Materials.

“Single-walled carbon nanotubes within the bandage will be able to identify an infection in the wound by detecting concentrations of hydrogen peroxide,” said Roxbury. Until now, the challenge with using nanotubes for this purpose has been immobilising them in a biocompatible manner such that they stay sensitive to their surroundings, according to Roxbury.

“The microfibres that encapsulate the carbon nanotubes accomplish both of these tasks,” Roxbury said. “The nanotubes do not leach from the material, yet they stay sensitive to hydrogen peroxide within the wounds.”

The “smart bandage” will be monitored by a miniaturised wearable device, which will wirelessly (optically) detect the signal from the carbon nanotubes in the bandage. The signal can then be transmitted to a smartphone-type of device that then automatically alerts the patient or a health care provider.

“This device will solely be used for diagnostic purposes,” said Roxbury. “However, the hope is that the device will diagnose an infection at an early stage, necessitating fewer antibiotics and preventing drastic measures, such as limb amputation. We envision this being particularly useful in those with diabetes, where the management of chronic wounds is routine.”

Safaee, who completed his doctorate in chemical engineering at URI, learned how to create polymeric fibres as an undergraduate student prior to coming to URI.

“Professor Roxbury was very supportive of the idea of designing wearable technologies based on carbon nanotubes and I was excited to take the lead on the project,” said Safaee. Working in Roxbury’s NanoBio Engineering Laboratory in the Fascitelli Centre for Advanced Engineering, Safaee used several advanced technologies to make the bandage a reality.

“We designed and optimised a microfabrication process to precisely place nanosensors inside the individual fibres of a textile,” said Safaee. “We utilised cutting-edge microscopes to study the structure of the materials that we produced. I also utilised a home-built, near-infrared spectrometer to optimise the optical features of the textiles.”

The next stage of the project will involve the verification that the bandages function properly in a petri dish with live cultured cells that would be found in wounds.

“These cells we’ll be using are known as fibroblasts and macrophages (white blood cells) that produce hydrogen peroxide in the presence of pathogenic bacteria,” said Roxbury. “If all goes well, we’ll move to ‘in vivo’ testing in mice. At that point, we would find a collaborator who specialises in these animal wound models.”

Testing has focused on small bandage samples, but the technology can be applied easily to much larger bandages.

“There really is no limitation in terms of the size,” said Roxbury. “In fact, this technology will be most useful in large bandages. Larger bandages can be more of a nuisance to remove and reapply, but our device won’t need to be removed to enable detection.”

While Roxbury moves forward with the project, Safaee has moved to the Massachusetts Institute of Technology for a postdoctoral position. “I joined the Furst Lab in MIT’s department of chemical engineering to advance and diversify my research in the area of molecular diagnostics and screening technologies,” said Safaee. “I will specifically work on designing high throughput screening technologies based on nanomaterials for point-of-care diagnostics and drug discovery applications.”

Scientists at the University of Rhode Island have devised a continuous, non-invasive way to detect and monitor infections in wounds by embedding nanosensors in the fibres of a bandage. The team has used single-walled carbon nanotubes in the bandage which will be able to identify an infection in the wound by detecting concentrations of hydrogen peroxide.
Smart Textiles