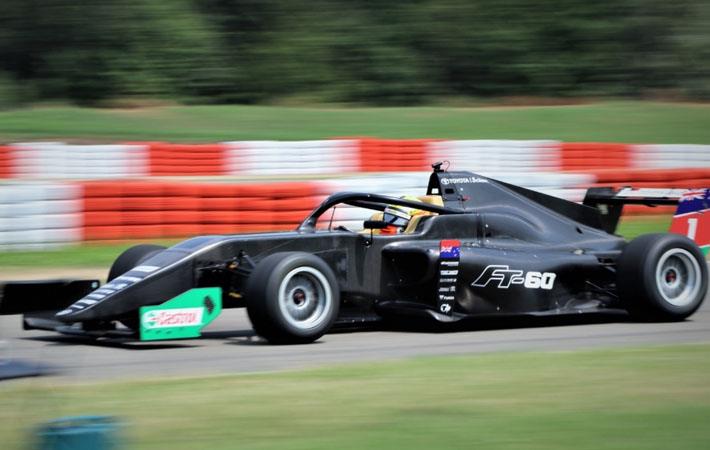 Pic: Scheurer Swiss GmbH
Scheurer Swiss is to produce carbon-reinforced 3D printing components for the latest generation of the racing series “Castrol Toyota Racing Series” (TRS). The well-known racing series based on a Formula 3 chassis is entering the next round. Toyota Gazoo Racing New Zealand has presented a new, more powerful racing car for the TRS 2020, the Toyota FT-60.

The third generation race car of the Castrol Toyota Racing Series is based on a regional Formula 3-specific Tatuus chassis, powered by a two-litre Turbo 8AR FTS engine – a racing version of the 8AR FTS engine used in both Toyota and Lexus road vehicles. The engine is capable of producing 285 hp, a sharp increase over the 215 hp produced by the previous 1.8-liter unit.

The new racing car first hit the track in Italy in July, even before its race debut in 2020. Formula 2 and European Le Mans Series driver, Arjun Maini, completed 900 kilometres in the Toyota FT-60, spread over three different tracks – Vairano, Cremona and Franciacorta.

“It was a very positive first test,” said Maini, who finished fourth in the 2015 TRS season with the previous FT-50 race car. “The new engine ran very smoothly, it is powerful and the handling very good. Gear changes and downshifts also feel very good in combination with the new engine”.

“Scheurer Swiss has optimised the design of the carbon-reinforced engine components for the test series of the Toyota FT-60 on our behalf and produced them in the shortest possible time,” says Gregor Häberlin, owner of Häberlin Composites.

“It was possible only thanks to 3D printing to deliver the tailor-made Toyota FT-60 components of the test series in such a short time,” says Dominik Scheurer, CEO of Scheurer Swiss. He says that the carbon-reinforced 3D printing process can also be used for industrial applications in the automotive sector, especially after the successful race track test run.

According to David Gouk of David Gouk Race Engines, the texture and material in the tests were not only visually convincing, but also withstood the enormous speed and heat as well as the compressive forces on the race track. “We are planning to go into series production soon with the 3D-printed carbon-reinforced engine components from Scheurer Swiss,” says the owner, who is considered a luminary in the field of engine development and has been successfully developing the engines of the Castrol Toyota Racing Series for years. “We are very satisfied with the advice and service provided by Scheurer Swiss, in particular the flawless and fast delivery of the urgently needed carbon-reinforced components for the Toyota FT-60 test series,” Gouk adds.

Toyota Racing Series manager, Nicolas Caillol, says: “The FT-60 is a modern car that offers more power and more drive than anything we have had in production before. We are very pleased with the quality of the 3D-printed engine parts that Scheurer Swiss supplied to us”.

The 2020 season of the Castrol Toyota Racing Series starts at the Highlands Motorsport Park in New Zealand in January 2020 and ends, after five consecutive weekends, with the New Zealand Grand Prix at the Manfeild Circuit “Chris Amon” in mid-February – one of the only two events outside Formula 1 that is officially allowed to use the term “Grand Prix”. Like this year, the series winner will receive up to seven super license points for possible Formula 1 careers.

The owners of Scheurer Swiss, Dominik Scheurer (CEO) and Robert Tween (CTO), have both been involved in racing and motor sports in composite engineering for many years, including Jordan F1, Sauber F1 and Toyota Motorsport, and with the right design and the right composite materials they provided the necessary properties for the highly efficient mechanical performance of a Formula 1 racing car. Scheurer Swiss is known for the development of highly efficient ultra-light and extremely stable composite components made of carbon, glass fibre or other fibre composites.

Scheurer Swiss is to produce carbon-reinforced 3D printing components for the latest generation of the racing series "Castrol Toyota Racing Series" (TRS). The well-known racing series based on a Formula 3 chassis is entering the next round. Toyota Gazoo Racing New Zealand has presented a new, more powerful racing car for the TRS 2020, the Toyota FT-60.
Automobile Textiles