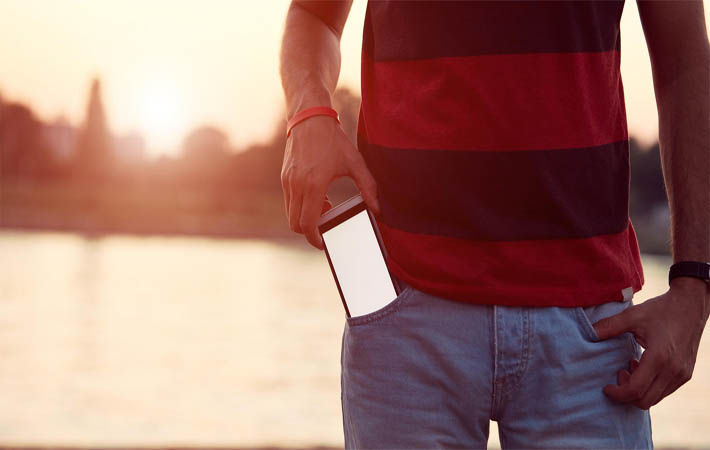 Pic: University of Waterloo
Scientists at the University of Waterloo in Canada have developed an innovative display that shows information through clothes and other fabrics. The new technology, which the researchers are calling PocketView, uses LED lights to display basic information. It can function as a stand-alone piece of technology or could be incorporated into existing or next-generation smart devices.

The researchers created prototypes that mimic smartphones, pens, key fobs and other shapes and sizes. The display shines through fabrics to show notifications for email or messages, time, weather or other forms of basic information.

“The idea is not to show all the information that you would normally see on your smartphone display,” said Antony Albert Raj Irudayaraj, a PhD researcher with the Cheriton School of Computer Science at the University of Waterloo.

Canadian scientists have developed an innovative display that shows information through clothes and other fabrics. The new technology, which the researchers are calling PocketView, uses LED lights to display basic information. It can function as a stand-alone piece of technology or could be incorporated into existing or next-generation smart devices.

“These are displays that show minimal information. That’s good enough if you’re walking or biking, for example, to show basic navigation instructions. Or let’s say you received a message and don’t want to divert attention from what you’re doing. You can peek at the display and see the notification,” he was quoted as saying in an university press release.

The new display technology was developed by a team of researchers working in the field of human-computer interaction. One of their goals is to create devices that regular people want and need, so the team conducted a mass public survey that informed the design for the prototypes.

“Some of the survey results challenged us to rethink the size, shape and functionality for the displays,” said Nikhita Joshi, also a PhD researcher in computer science at Waterloo.

“The different sizes are important because so much women’s clothing has tiny pockets. A phone in the front pocket can be uncomfortable. So having something small just gives people way more options. We created a whole variety of form-factors that would also be suitable for smaller pockets that are common in women’s clothing,” she said.

Because the display devices can take various shapes and sizes, they have the versatility to be worn and used in any piece of clothing that has a pocket. Another key point of the new display technology is that it is relatively inexpensive and could easily and quickly be rolled out on a large scale. The prototypes are also Bluetooth enabled, meaning that they sync with existing devices.

Although currently working with stand-alone prototypes, the researchers say the next generation of these kinds of LED displays could easily be incorporated into existing devices. And whereas other research in wearable displays focuses on creating new high-tech fabrics, the utility of PocketView means that it works with clothes people already have.

Irudayaraj, Joshi and co-researchers Daniel Vogel, Rishav Agarwal, Aakar Gupta and Omid Abari presented their research at the 2021 ACM symposium on user interface software and technology held from October 10 to 14.

Constructions begin at new Hexcel Centre of Excellence in Utah