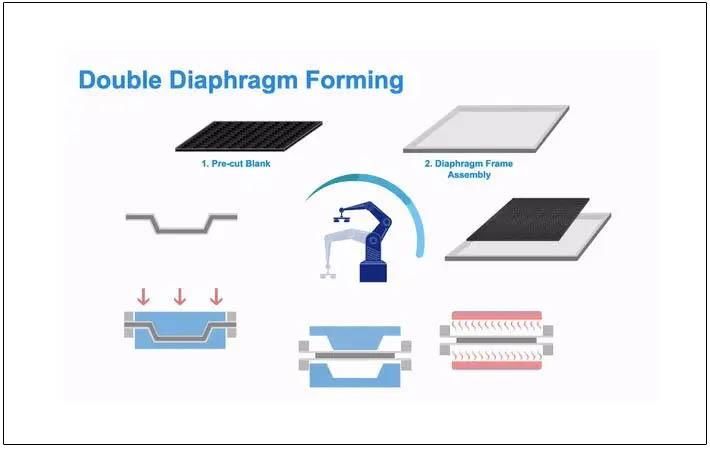 Pic: Solvay
Solvay has developed the material and technology to help automotive and aerospace industries to increase production of composite parts. Its fast-cure prepregs and Double Diaphragm Forming (DDF) are a way to automation. The group has put up a fully automated composite production line at its facility in Heanor, England to demonstrate the process.

Composite materials are set to represent an increasingly important proportion of what vehicles of all sorts are made of, as the trend towards emissions reduction through lightweighting is only going to accelerate. Certain niche markets like high-end automobiles and an increasing number of aircraft parts have already started replacing metal with composites for specific applications, but there are two major roadblocks keeping composites from moving into mass production: cost and complexity.

The answer is the automation of production lines. But that’s easier said than done. Because of their tack (stickiness), composites are tricky to manipulate for assembly robots. Moreover, other issues such as debris on the parts and the pre-treating and cleaning of tools mean the process remains a slow and expensive one, with many crucial steps to be carried out by hand, as Hollis mentions.

But over the past few years, Solvay has been working on a solution to these problems such as Double Diaphragm Forming (DDF). Combined with the chemistry of the composites that enables fast curing, this allows automation of the entire process, significantly accelerating cycle time and reducing costs.

In fact, with DDF, the production time for a single piece, from raw material to finished and ready-to-use part, is brought down to three minutes, which amounts to over 100,000 parts per year, thanks to continuous production as the robots can work simultaneously. These are the changes that can open the way for industrialisation of composite part manufacturing. “DDF is a Solvay technology that was already used commercially by BMW a few years ago,” explains Hollis, “and we’ve seen a lot of interest over the last 12 months from OEMs in the automotive sector initially, but aerospace is definitely interested in applying new technologies and best practices to increase their build rates as well.”

Hollis and his team have been explaining to potential customers what DDF could do for them. “The feedback we got is that customers liked the technology but had a hard time imagining what the line may look like, so we took on the challenge of creating our own in order to show them,” he says. “The whole thing was designed and built by our team. We took a concept and turned it into reality.”

What they did is put together a fully automated composite production line at Solvay’s facility in Heanor, England by repurposing existing machines (three robots and a molding press). But, it remains a demonstration line. Solvay has no intention of moving into part manufacturing.

On 16 January, 150 Solvay customers and partners from around the world were invited to Heanor to see the line. “We wanted to show them the art of what is possible,” continues Hollis. “This production line is here to help us de-risk and validate the applicability of DDF technology for their specific needs.” By adopting Solvay’s technology and materials, these customers are all set to take the adoption of composites to the next step.

Solvay has developed the material and technology to help automotive and aerospace industries to increase production of composite parts. Its fast-cure prepregs and Double Diaphragm Forming (DDF) are a way to automation. The group has put up a fully automated composite production line at its facility in Heanor, England to demonstrate the process.
More Solvay News...
Composites