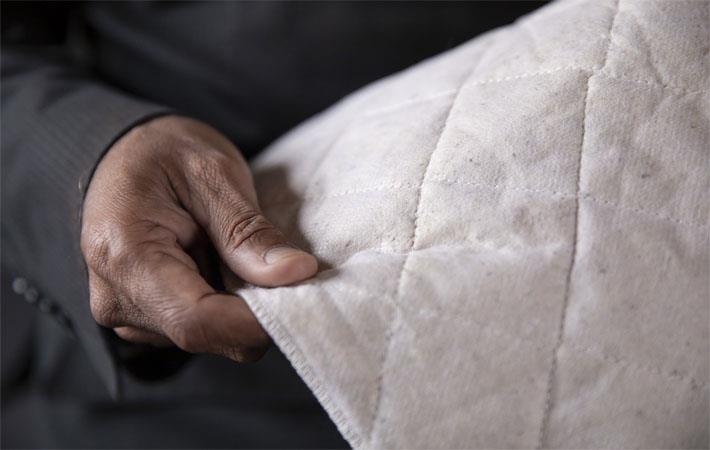 Pic: Texas Tech University
A Texas Tech University material scientist who proved that raw cotton works best to clean spilled oil in 2017, has now successfully turned the idea into a product – Towelie. The product has been used in a real-life situation when there was a minor oil spill in a National Thermal Energy Corporation plant in Vallur on November 2, and found to be absorbing oil.

Nine years ago, Texas Tech University material scientist Seshadri Ramkumar had an idea to help clean up the environment. With his expertise in technical textiles, he set out to determine the best way to sop up spilled oil – and he did. In 2017, Ramkumar announced his findings: raw cotton works better than any other product.

Ramkumar's findings had a huge potential impact – but unless someone actually created that raw cotton product and used it to absorb oil, the research would not have achieved its goal.

"A lot of ideas come out of labs," said Ramkumar, a professor of chemical countermeasures and advanced materials in the Department of Environmental Toxicology. "It's nice to know your idea will work, but unless there is somebody who is going to grab that idea and run with it, create a product and put it out into the world for others to use, it's still just an idea."

After determining that raw cotton was the best sorbent, Ramkumar knew it needed to be made into a form that was commercially usable – and for that, he needed a collaborator who could create the physical product. He partnered with WellGro United in Chennai, which had a machine at its collaborator's factory that could form raw cotton into a flat, planar structure.

The product's final form is a mat, wipe or roll. There currently are two versions – one that is 100 per cent cotton, and one with a cotton core inside a very thin packaging material, which is 85-90 per cent cotton.

"I needed to use their wisdom in getting this structure and then work in multiple iterations, because it took a couple of years to come up with the optimum thickness and structure and, more importantly, cost," Ramkumar said.

For the product to be marketable, it had to be priced competitively with other products used for the same purpose. That was the tricky part, because most competitors used a plastic base, which was much cheaper – but ultimately sticking with a cotton core worked.

Eight years ago, while Ramkumar was proving the science, he had two high school students helping in his Chemical Countermeasures and Advanced Materials Laboratory. One was Coronado High School senior Ronald Kendall, the son of one of Ramkumar's professional colleagues who wanted to participate as part of a science project. The other was Luke Kitten, then a student at Trinity Christian High School.

While working on the research, Kendall graduated from high school and began attending Texas Tech. He stopped working in Ramkumar's lab after his freshman year, but the two kept in touch. In 2016, Kendall graduated with his bachelor's degree in energy commerce.

When WellGro United told Ramkumar they needed an international partner to help market the product, particularly someone in Texas because of the state's role as an oil and natural gas hub, Ramkumar asked Kendall to come on board.

"Traditionally, a product like this would be considered an oil-absorption mat, and it would be used for passive applications, like absorbing dripping oil from a machine," Kendall said. "A lot of the mats and competitors that look similar to the Towelie are not durable, and they're very flimsy. You just lay them there, and then they fall apart. The Toweli is designed, stitched and it's very durable, so we're able to use it for active applications as well.

"In the automotive sector, a lot of companies are not using as many of the little red rags and blue shop towels that you may see in your local oil-change shop. They're able to do day-to-day activities more efficiently by utilising our Towelie product because it has a porous outer layer that allows them to cut through sticky grease or oily messes when they're doing a job. It's better on the environment, and in a lot of cases, it's making their job easier, whether that's an oil-change shop or some of our customers in oil and gas," Kendall added.

One customer, a large oil-and-gas company, was using shop towels to clean paraffin off drilling pipes before they found Towelie. "Instead of going through hundreds of rolls of shop towels a day, they only use a couple Towelies a day," Kendall said. "Having the absorption factor with a wiping factor makes this a time-saving product for a lot of people and companies."

One application in which Ramkumar wanted the product to be usable was for marine oil spills – that meant it needed to be able to absorb oil without absorbing water. Towelie fulfils this goal.

While Ramkumar was working with WellGro United to determine the best iteration of the product, something of a revolution happened in the rest of the world – namely, plastic and microplastic pollution.

"The biggest difference between our product and literally every other competitor in our marketspace is, we have a biodegradable product that produces no microplastics," Kendall said. "Microplastics are a huge issue we're facing in the world today from all these single-use plastic items, whether it be plastic bags at the grocery store, plastic water bottles or, when you look at any industrial-model market, they're utilising plastic-based oil-absorption mats and wipes.”

"These wipes peel off strings of plastic that might not stay where we dispose of them. They might not stay in the landfill – they'll end up in the water supply, they might end up in the ocean, they'll end up in your drinking water. It's kind of mind-boggling when you realise the amount of oil-absorption products used in construction, marine, automotive and oil and gas industries. This is incredibly destructive, to have a cleanup item that's increasing pollution," Kendall said.

Even though Towelie is still slightly more expensive than plastic-based competitors, Ramkumar and Kendall believe its environmental impact can tip the scales in its favour. "Its cost may not be on par with the synthetics, but given the performance, given the sustainability, given the plastic contamination issue, I think it has come to a competitive level," Ramkumar said. "Now, people are noticing it."

What is more, the product was proven useful in action on November 2, when there was a minor oil spill in a National Thermal Energy Corporation plant in Vallur, about 12 miles from Chennai, where WellGro United is located. The plant, which recently had been contacted as part of Towelie marketing efforts, reached out to WellGro United's vice president for marketing, Nambi Srinivasan. "The Towelie wipe instantaneously absorbed heavy furnace oil and light crude oil," Ramkumar said.

A Texas Tech University material scientist who proved that raw cotton works best to clean spilled oil in 2017, has now successfully turned the idea into a product – Towelie. The product has been used in a real-life situation when there was a minor oil spill in a National Thermal Energy Corporation plant in Vallur on November 2, and found to be absorbing oil.
Industrial Textiles

McLaren acquires rights to Elva name for its new car