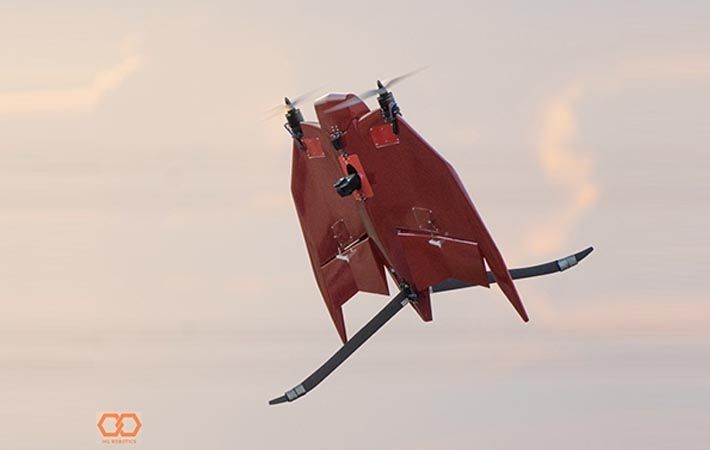 Cobra has worked with HG Robotics since 2018, designing and productionising composite components for their multi-rotor unmanned aerial vehicles (UAVs or drones). Since then, HG Robotics has continued to expand its range of drones. Cobra has also played a leading role in the development of HG Robotics’ latest platform – Vetal.

Vetal is a twin rotor, tail sitting, vertical take-off and landing (VTOL) drone that the company has recently launched for large scale agricultural surveys as well as general surveillance monitoring.

Building upon earlier experience as a component manufacturer for HG Robotics, Cobra has strengthened the partnership with the new Vetal drone, supporting HG with the development of an entirely new production concept for the carbon fibre composite flying wing. Having developed the initial flying shape of the Vetal platform, HG Robotics had produced the first flying prototypes using a more traditional UAV construction technique of thin composite skins, with ribs and frames supporting the hollow structure.

Although these early aircraft performed well in flight, there were concerns that the construction approach used would not be able to meet all the project requirements relating to durability, production rate and price.

Drawing from its decades of experience with close tolerance moulding of EPS foam cored sandwich components for the watersports market, Cobra proposed a hybrid solution, combining both hollow and cored sections, for the flying wing. The main body of the aircraft comprises a PVC foam sandwich shell with a low density EPS foam rib which, combined with a fully foam cored tail structure, delivered a complete airframe fractionally lighter than the customer’s challenging target.

In addition to the impressive cycle time reduction, the new build method also improved the impact resistance and overall durability of the Vetal platform, a key benefit for industrial users who need to keep their survey drones flying with the minimum of maintenance.

To reduce weight, a combination of carbon fibre stitched biaxial fabrics and UD reinforcements are used wherever possible, with additional glass fibre reinforced sections of laminate being employed where radio-transparency or insulation from metallic parts is required.

The Cobra production engineers have also been able to incorporate glassfibre reinforcements and mounting points for the Vetal’s propulsion system and other ancillary equipment into the moulding process, minimising the additional processing steps in the assembly and finishing stages.

Cost effective composite tooling has been produced for the first Cobra built Vetal airframes, enabling a rapid start-up to the series production but still providing the possibility for incremental design changes before switching to CNC machined aluminium tooling for high-rate production in the future. With process parameters defined in line with the company’s lean manufacturing principles, Cobra has prepared a production line that can scale up quickly. HG Robotics has successfully developed an extensive client base for its previous multi-rotor drones and Cobra expects to see considerable demand for the faster new Vetal platform for larger scale survey applications.

“We are extremely pleased to be strengthening our relationship with HG Robotics and working together on the vetal project is a great example of how Cobra can develop durable, reliable and affordable composite components that we can also manufacture on a mass production scale. Our customers are exceptional product designers, and we provide the complimentary skills to incorporate the most efficient composite materials and processes,” Sila Sertsorn, technical director, Cobra International, said.