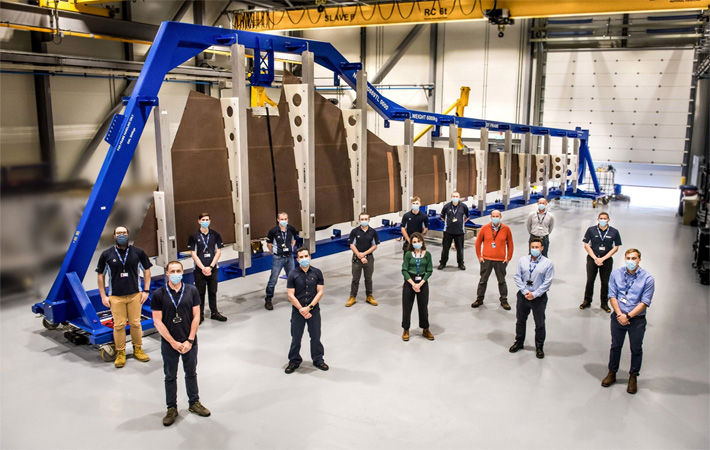 The Wing of Tomorrow programme will not only test the latest composite materials and new technologies in aerodynamics and wing architecture but, importantly, explore how wing manufacturing and industrialisation can be improved to meet future demand as the sector emerges from the pandemic. Three full-size prototype wings will be manufactured in total, one will be used to understand systems integration; a second will be structurally tested to compare against computer modelling, while a third will be assembled to test scaling-up production and compare against industrial modelling, Airbus said in a press release.

Wing of Tomorrow, part-funded by the UK’s Aerospace Technology Institute, is a fully transnational Airbus programme involving global partners and teams across Airbus’ European sites, including Bremen in Germany, where the ‘Wing Moveables’ team is based. The three wing demonstrators will bring together more than 100 new technologies to explore new manufacturing and assembly techniques with the goal of making aviation more sustainable.

Wing of Tomorrow, a major Airbus research and technology programme, has reached a key milestone with the assembly of its first full-size wing prototype. UK's Airbus designs, manufactures, and delivers commercial aircraft, helicopters, military transports, satellites, and launch vehicles, and provides data services, for customers on a global scale.

Sub-assembly of the complex wing cover took place at Airbus’ Filton site, England, having been manufactured at the National Composite Centre in Bristol. The wing cover and a major component from GKN Aerospace, the Fixed Trailing Edge, were delivered to the Advanced Manufacturing Research Centre, Wales, facility on Airbus’ wing-production plant in Broughton, Flintshire, for assembly to begin.

“Wing of Tomorrow, a crucial part of Airbus’ R&T portfolio, will help us assess the industrial feasibility of future wing production. High-performing wing technology is one of several solutions, alongside sustainable aviation fuels and hydrogen - we can implement to contribute to aviation’s decarbonisation ambition. Wing of Tomorrow is also an example of how large-scale industry collaboration will be critical to achieving our sector’s agenda for a more sustainable future,” Sabine Klauke, Airbus chief technical officer said.