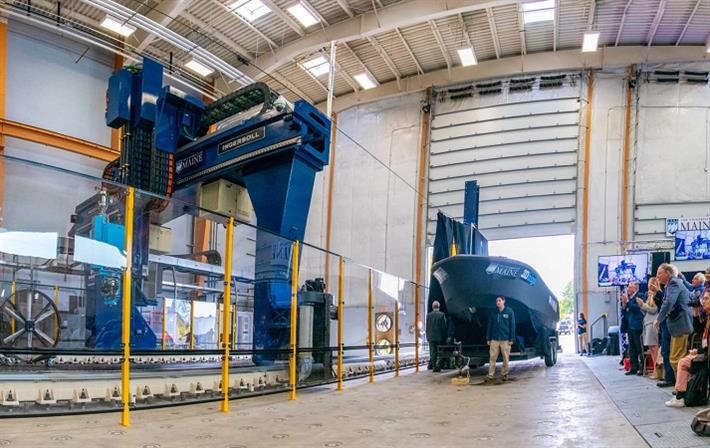 The ceremony was a milestone in UMaine’s leadership in cutting-edge composite material research and development, and commitment to use Maine’s vast natural resources to drive innovation that generates major economic development opportunities in the state and beyond.

“I was delighted to join UMaine’s celebration unveiling the world’s largest 3D printer and largest 3D-printed object,” said Senator Susan Collins. “The future of the [UMaine] Composites Centre is bright, thanks to the excellent working relationship between UMaine, Oak Ridge National Laboratory and many other federal agencies, which will support next-generation, large-scale additive manufacturing with biobased thermoplastics. As a senior member of the Senate Appropriations Committee, I helped secure $20 million for this exciting collaboration, and an additional $20 million is included in the committee-approved energy funding bill. By working together, UMaine and Oak Ridge will strengthen environmentally responsible advanced manufacturing throughout America, as well as the forest-products industry in Maine.”

“Maine is the most forested state in the nation, and now we have a 3D printer big enough to make use of this bountiful resource,” said Senator Angus King.

“As we saw today, the University of Maine Composites Centre does award-winning, cutting-edge research that makes Maine proud and will bring jobs to our state,” said US Rep Jared Golden. “Their work, like the boat and 3D printer we’re here to see, has impressive potential to change how we make things out of all sorts of materials — including Maine wood fibre. Today is about three Guinness World Records, but it’s also about celebrating innovation that will help protect and create good-paying Maine jobs in forest products and manufacturing.”

The new 3D printer is designed to print objects as long as 100 feet by 22 feet wide by 10 feet high, and can print at 500 pounds per hour. The one-of-a-kind printer will support several ambitious initiatives, including development of biobased feedstocks using cellulose derived from wood resources, and rapid prototyping of civilian, defence and infrastructure applications.

By placing CNF from wood into thermoplastics, bioderived recyclable material systems can be developed with properties that may rival traditional materials, possibly even metals.

“This is an exciting achievement in our partnership with the University of Maine,” said Moe Khaleel, associate laboratory director for Energy and Environmental Sciences at ORNL. “This new equipment will accelerate application and integration of our fundamental materials science, plant genomics and manufacturing research to the development of new sustainable bioderived composites, creating economic opportunity for Maine’s forest products industry and the nation.”

The cluster brings together the expertise of UMaine researchers and marine industry leaders to further develop and commercialise 3D printing to benefit boatbuilders in the state. By 3D printing plastics with 50 per cent wood, boat molds and parts can be produced much faster and are more economical than today’s traditional methods.

“With this remarkable feat, the University of Maine continues to demonstrate that it’s a worldwide leader in catalysing innovation, advancing new technologies and driving economic growth for our state,” said Governor Janet Mills.

To demonstrate the new printer’s capabilities, UMaine 3D printed a 25-foot patrol boat with a hull form developed by Navatek, a leader in ship design and a UMaine Composites Centre industrial partner. The 5,000-pound boat was printed in 72 hours. The massive printer, with both additive and precise subtractive manufacturing capabilities, enables rapid prototyping for both defence and civilian applications.

“The innovation that we have witnessed here at the University of Maine will revolutionise how the Army prototypes and manufactures shelters, vehicles and other large systems,” said Col Frank Moore, military deputy for the CCDC Soldier Centre. “The lighter yet stronger 3D printed systems will advance the state of the art in additive manufacturing, forging the future of expeditionary equipment IAW with the Army’s new policy on advanced manufacturing.”

Working with the US Army Corps of Engineers, the 3D printer will further advance UMaine’s groundbreaking innovations in rapidly deployable, low-logistics infrastructure systems. That includes a 5,000-pound, 21-foot-long 3D-printed mold for a new 76-foot-long composites bridge girder. The girder has been licensed to a UMaine spinoff company, Advanced Infrastructure Technology, that is in the process of fabricating girders for a bridge to be constructed in Hampden, Maine in summer 2020. In addition, rapid production of stay-in-place concrete formwork is a potential solution for both infrastructure and coastal resiliency construction applications.

“We foresee that this capability will foster the development of on-demand force projection nodes, logistics over the shore solutions, as well as capabilities for response and recovery to natural disasters, globally,” Durst said. “Additionally, this large 3D printing capability supports the development of rapid construction of transportation infrastructure emplacement, repair and rehabilitation for this critical need of our nation. The USACE ERDC looks forward to the continued, productive collaborative partnership with the UMaine.”

“This is a benchmark in the history of pioneering research of the Advanced Structures and Composites Centre,” said UMaine president Joan Ferrini-Mundy. “In keeping with the leadership expected of the state’s public research university, ASCC has collaborated with partners statewide and nationwide to innovate and problem solve to advance economic and workforce development that makes a difference in Maine and beyond. This initiative aligns with the strategy of the University of Maine System Research and Development Plan to strengthen research and economic development efforts that support Maine industries, foster business formation and expansion, and mentor students working across disciplines on exciting, meaningful problems.”