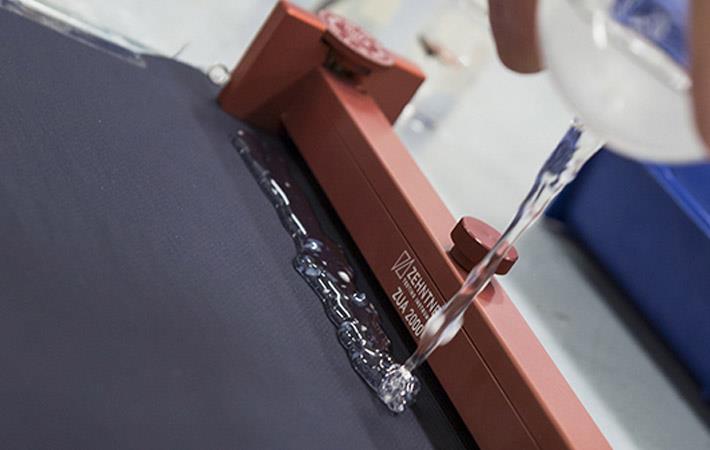 Pic: University of Borås
A scientist in University of Borås has developed a new textile material which is lighter stronger, more heat and weather resistant, cheaper to manufacture, less chemicals involved, and recyclable, in comparison to the material currently used for textile bioreactors. The material may also be used in tents and structural buildings with inflatable elements.

When doctoral student Mostafa Jabbari began his research project, the aim was to improve the properties of the material used for textile bioreactors. But he changed tracks and developed a whole new textile material – with better properties than was the original goal. Lighter, stronger, more heat and weather resistant, cheaper to manufacture, less chemicals involved, and one hundred percent recyclable.

The textile reactors developed by the University of Borås are now mainly used to produce biofuels and are now sold by FOV Biogas (fovbiogas.com). Unlike solid metal or concrete reactors, textile reactors are easy to transport and install. The desired properties of the material used in textile reactors are that it should be light, impermeable so that no substances can penetrate it, that the substances formed in the reactor remain, that it can withstand different temperature and weather conditions, and that is be durable and foldable to facilitate transport.

“In the first part of my project, I modified an existing material to improve its insulating properties to withstand temperature changes. But there were two problems: one was that the adhesion between the two constituents, that is, the material that forms a sealing layer, did not have sufficient adhesion properties and the coating didn’t stay adhered. The other problem was the recyclability, meaning that it was a blended material, one material for the fabric itself and another for the coating, which makes it extremely difficult to recycle, if not impossible,” he says.

The second part of the project was, therefore, to use one and the same material in both the textile and the coating. Polyamide would prove to be perfect for the purposes of the project. The result was a whole new kind of textile material that surpasses existing materials on several points and can be recycled again and again. He calls the new material APCT, which stands for "All-Polyamide composite Coated Textile," unlike textiles with, for example, PVC coating. The most common method of making a textile material dense is to apply a sealing layer and have it adhere using heat or chemicals, which requires a lot of energy and water. Jabbari's solution was to incorporate textile and coating into each other in a process that is neither dependent on heat nor large quantities of water.

“I dissolved polyamide with a solvent consisting of formic acid and applied it as a thin film onto the polyamide textile. The solution causes the polymer strands to creep into the fabric. When the solvent evaporates, entirely without heat or other chemicals, the polyamide strands in the solution and the textile are entangled in each other and the result is a completely new textile material that is impermeable.”

However, the solvent he used in the beginning proved to have some challenging properties, such as that it smells bad, is expensive, and is flammable. Therefore, he developed a new concept for the solvent, as well.

“The challenge was to produce a mixture with as little formic acid as possible, but with the right properties to be able to dissolve the polyamide. We did several experiments in which we replaced almost half of the amount of formic acid with urea and calcium chloride, two harmless substances. The result was a clearly more environmentally friendly solvent. However, the process needs to be refined to work industrially,” he explains.

Obtaining the optimal mixture can be done by testing it, but with several chemical substances involved, either pure luck or countless experiments are required to match different substances and proportions to the desired mixtures. Therefore, a computerised method was also introduced to get a reasonable match and thus minimise the need for the number of experiments. This is a method that researchers in other fields may also use when developing or needing to replace or design a solvent mixture profile.

Although the starting point for the project has been to develop a suitable material specifically for textile reactors, with the right properties in terms of insulation, permeability, and flexibility, he sees many other possible applications.

“The new textile could, for example, be used for tents, different types of structural buildings with inflatable elements, or for anything that needs to be lightweight and keep impermeable.”

A scientist in University of Borås has developed a new textile material which is lighter stronger, more heat and weather resistant, cheaper to manufacture, less chemicals involved, and recyclable, in comparison to the material currently used for textile bioreactors. The material may also be used in tents and structural buildings with inflatable elements.
Construction Textiles