US' AFRL, Cornell develop tech to see through composite components 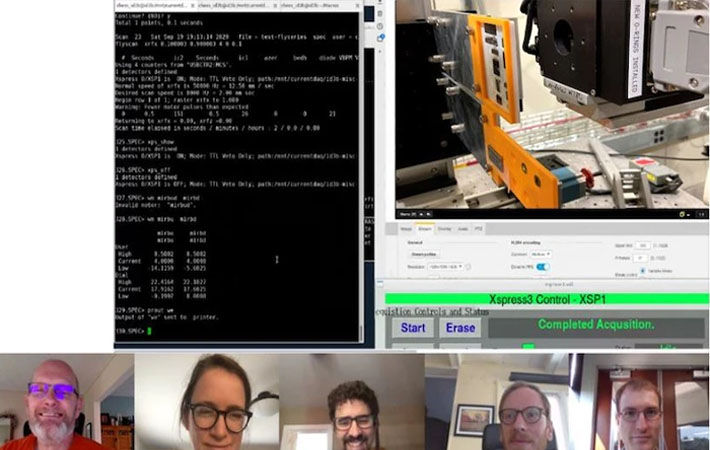 Pic: Nellis Air Force Base
The Air Force Research Laboratory and Cornell University have developed a technology to look inside the composite components while being manufactured, thereby facilitating instantaneous inspection. The process uses phase contrast imaging and micro-beam scanning to produce real-time X-ray scattering images of the component during and post production.

The Materials Solutions Network at the Cornell High Energy Synchrotron Source (CHESS) participated in the research from the Cornell University. The process is expected to save the Air Force millions of dollars in qualification and certification of composite parts used in advanced unmanned aerial vehicles and satellite systems.

“Imagine having Superman’s X-ray vision,” said Dr. Hilmar Koerner, research lead of the Polymer Matrix Composites, Materials and Processes Research Team of AFRL’s Structural Materials Division. “You could go to a manufacturing floor and be able see through parts and see defects ‘on the fly,’ while they are being produced. If you could see the defect, you could pull the part out of production before it actually gets in a system and causes the system to fail, or (you can) adjust the processing parameters to correct for it.”

In routine manufacturing, a quality control inspector currently has to wait until a part is completely formed to examine it and see if it has defects. This new technology allows the continuous inspection of a critical part while it is being created, looking for voids or inconsistencies in the material as the part takes shape, in particular during an additive manufacturing process.

Although still in its infancy, additive manufacturing (or 3D printing) is expected to change the way machined parts will be made in the near future, a change that is under way even now. Instead of being made by processes like stamping, forging, welding or hand lay-up, parts such as wings for drones will be “printed.” That is, they will be built up layer by layer from molten material forced through nozzles. Those layers eventually stack up and form a pattern that takes the shape of the desired aircraft component.

“Right now what we can look at is on a small scale,” said Koerner when asked how big an area of a component can currently be inspected with phase contrast imaging (also called radiography). “We have a window of a few millimetres by a few millimetres (in which) we can see defects right away. And it’s not instant yet, but it is a huge step toward instant. It takes us a few minutes to a half an hour to see what’s going on and see how well the carbon fibres are aligned in a 3D-printed composite.”

“Five to ten years ago when we did these experiments it would take as long as six months to analyse the X-ray image data. Now it takes less than an hour,” Koerner said.

For this process, Koerner’s team uses X-rays that cannot be used on the manufacturing floor. “We are using X-rays a million times stronger than what are used in a doctor’s office.”

The team is conducting its experiments at a test facility at the Cornell High Energy Synchrotron Source, which produces the high-intensity, high-energy X-ray beams. The experiments are carried out inside a hutch with thick, lead-shielded walls.

“You cannot be in the hutch when the experiment is being run,” said Koerner. “The X-rays being used are so strong you could look through someone quite literally within a second. You can watch it happen that fast in real time. It’s not like when a doctor takes an X-ray exposure and spends time developing it. Here we have real-time images on a monitor. The X-ray beam comes in, hits the sample (as it’s being built up layer by layer) and creates an image behind it within fractions of a second.”

To take advantage of this kind of intimate inspection, an extrusion-based 3D printer is mounted in the path of the X-ray beam. “As layer by layer builds up the part, we can watch the structure and any defects in real time as it’s printed,” said Koerner.

Once the part has been printed, another inspection technique uses a micro-beam (a very narrow X-ray beam, 1 to 5 microns in diameter) to scan across the sample. This process takes longer, about two to three hours. “You then stitch all the images together into a map,” explained Koerner. “The map of data from more than a quarter million images tells you everything about the sample down to the nanometre scale (a millionth of the thickness of a human hair). So now you know everything about your part, starting from the actual printing to the final part, including nanoparticle alignment.”

According to Koerner, one inherent problem in 3D printing is consistency from part to part. “3D printing is basically creating a part with defects,” he said. “We won’t ever reduce the defects to zero.”

So, the challenge becomes not to eliminate defects, but to print each part with the same defects all the time. “You want to make sure the defects are always in the same place so the performance (of the part) is predictable,” said Koerner.

The X-ray inspection sees those “consistent” defects, but more importantly, it also spots unexpected defects like voids. “That’s one of the goals,” said Koerner. When a new defect suddenly appears, the team knows that something has gone wrong and something needs to be fixed. “The angle of the nozzle may need to be changed to get rid of gaps. Or we may have to change the nozzle design or the printing parameters.”

AFRL invested about $7 million to build two X-ray beamlines at the Cornell High Energy Synchrotron Source in 2019. “The goal of these two beamlines,” said Koerner, “is to work with our industrial partners to solve defence department challenges to create composites faster, stronger and better.”

The Air Force Research Laboratory and Cornell University have developed a technology to look inside the composite components while being manufactured, thereby facilitating instantaneous inspection. The process uses phase contrast imaging and micro-beam scanning to produce real-time X-ray scattering images of the component during and post production.
Aerospace Textiles