US' INDA adds six new board members and officers 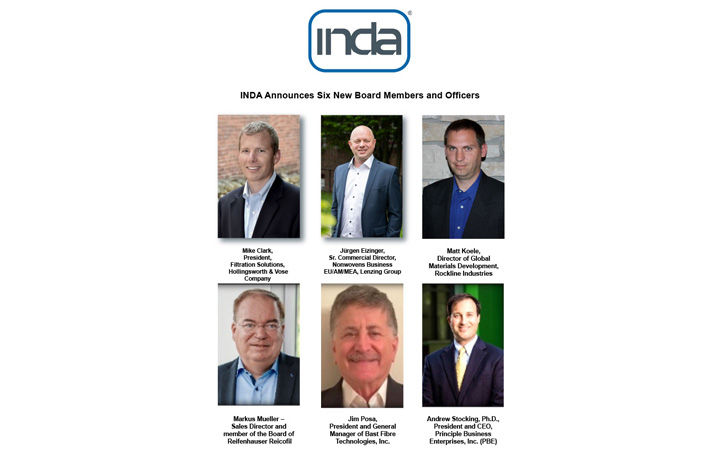 Pic: INDA
US’ INDA, the Association of the Nonwoven Fabrics Industry, has announced six new board members and its 2022 slate of officers to guide the success of the nonwovens industry and its members. The new board members bring a high level of diverse expertise and insight to the management of the association as it moves forward with its vibrant growth.

Jürgen Eizinger is a senior commercial director, nonwovens business EU/AM/MEA, Lenzing. Eizinger has nearly 20 years of fibre industry experience. He has been with Lenzing since 2001 and most recently was vice president of the global nonwoven business. He has worked at multiple locations around the world and held various commercial, engineering and technical customer services roles. Jim Posa is president and general manager, Bast Fibre. Posa has 30-plus years of nonwovens experience and has successfully led businesses from start-ups to some of the largest companies in the nonwovens market. He has developed and implemented strategic business, development, operational and acquisition growth plans. His teams have worked with businesses focused on most of the major end use markets such as hygiene, wipes, filtration, medical and industrial. As a senior executive, Posa has led global businesses at Fiberweb, BP/Amoco, CEO of a Nisseki/Amoco joint venture (ANCI), Lydall, and Nitto America. A long-time INDA supporter, he has previously served on committees and as a board member, INDA said in a press release.

Markus Mueller is the sales director and board member at Reifenhauser Reicofil. Mueller brings to the INDA Board 35 years of experience with Reifenhauser in the nonwovens and film industries. His experience has included roles as PLC engineer, commissioning engineer, project manager and sales manager. Mueller has extensive knowledge of the global hygiene and medical nonwovens markets. He holds a degree in electrical engineering from the Technical University of Cologne.

US' INDA, the Association of the Nonwoven Fabrics Industry, has announced six new board members and its 2022 slate of officers to guide the success of the nonwovens industry and its members. The new board members bring a high level of diverse expertise and insight to the management of the association as it moves forward with its vibrant growth.

Matt Koele is the director of global materials development, Rockline Industries. Koele is based at Rockline’s headquarters in Sheboygan, WI.  Before joining Rockline in 2012, he has held several business and Research and Development (R&D) leadership positions at SC Johnson and Kimberly-Clark Corporation. An inventor with over ten patents, Koele is a magna cum laude graduate of Michigan Technological University in Chemical Engineering. Mike Clark is the president, filtration solutions, Hollingsworth & Vose Company. Clark joined H&V in 2003 and has held numerous leadership positions in the US and Germany. He previously served as the president of the high efficiency and specialty filtration division from 2009 to 2020.  Before joining H&V, Clark was a strategy consultant for eight years working with Fortune 100 manufacturing companies. He holds a bachelor’s in mechanical engineering from Rensselaer Polytechnic Institute, the company said in a statement.

Andrew Stocking is the president and CEO, Principle Business Enterprises, (PBE). Stocking joined PBE in 2017 after a career in engineering, technology, non-profits and government. He was named president and COO in 2018, then president and CEO in 2020, becoming the third-generation leader of the family-owned organisation. He previously held roles in the private sector and within federal government offices, including the department of energy and congressional budget office. He earned a BS in chemical engineering and an MS in civil engineering from Stanford University, and a Ph.D. in resource economics from the University of Maryland.

Wendy Warner, vice president sales and marketing, Spunlace Hygiene & Wipes, Glatfelter, has moved up to vice chair, planning. Chris Astley, senior vice president and chief commercial officer, Glatfelter has concluded his two-year term as INDA board chair and normally would continue as an INDA officer in the position of past chair.

US’ IFAI to be renamed as Advanced Textiles Association
Press Release