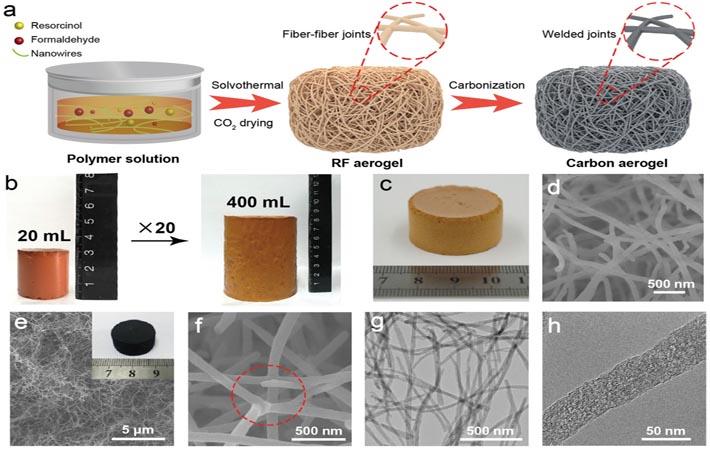 Pic: USTC
Scientists at the University of Science and Technology of China (USTC) have developed a process to fabricate superelastic and fatigue resistant hard carbon aerogels with nanofibrous network structure by using resorcinol-formaldehyde resin as a hard carbon source. The research has been inspired by the flexibility and rigidity of natural spider silks webs.

The work led by Prof YU Shuhong is published in Advanced Materials.

Conductive and compressible carbon aerogels are needed in a variety of applications. Caerogels have been widely explored by using graphitic carbons and soft carbons, which show advantages in superelasticity. These elastic aerogels usually have delicate microstructures with good fatigue resistance but ultralow strength. Hard carbons show great advantages in mechanical strength and structural stability due to the sp3 C-induced turbostratic “house-of-cards” structure. However, the stiffness and fragility clearly get in the way of achieving superelasticity with hard carbons. Up to now, it has been a challenge to fabricate superelastic hard carbon-based aerogels.

The polymerisation of resin monomers was initiated in the presence of nanofibres as structural templates to prepare a hydrogel with nanofibrous networks, followed by the drying and pyrolysis to get hard carbon aerogel. During polymerisation, the monomers deposit on templates and weld the fibre-fibre joints, leaving a random network structure with massive robust joints. Physical properties (such as diameters of nanofibre, densities of aerogels, and mechanical properties) can be controlled by simply tuning templates and the amount of raw materials.

Due to the hard carbon nanofibres and abundant welded joints among the nanofibres, the hard carbon aerogels display robust and stable mechanical performances, including super-elasticity, high strength, extremely fast recovery speed (860 mm s-1) and low energy loss coefficient (<0.16). After being tested under 50 per cent strain for 104 cycles, the carbon aerogel shows only 2 per cent plastic deformation, and retained 93 per cent original stress.

The hard carbon aerogel can maintain the super-elasticity in harsh conditions, such as in liquid nitrogen. Based on the fascinating mechanical properties, this hard carbon aerogel has promise in the application of stress sensors with high stability and wide detective range (50 KPa), as well as stretchable or bendable conductors. This approach holds promise to be extended to make other non-carbon based composite nanofibres and provides a promising way of transforming rigid materials into elastic or flexible materials by designing the nanofibrous microstructures. (SV)