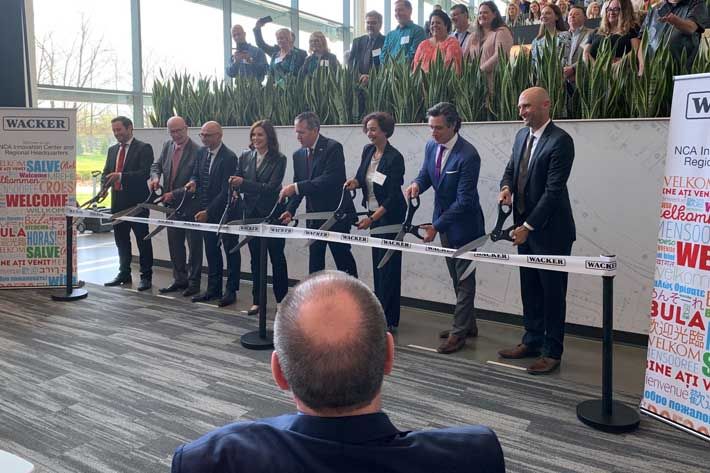 Pic: PR Newswire
Wacker, a pioneer and global leader in chemical R&D and manufacturing, recently held a grand opening of its new innovation centre and regional headquarters in Ann Arbor. Corporate leadership hosted Michigan Governor Gretchen Whitmer, along with several other state, county and township officials, in conducting a ribbon-cutting ceremony and touring the site.

The technology campus covers 18 acres at 4950 S. State Rd. and serves as the hub of leadership and innovation for Wacker’s North and Central Americas (NCA) region. The state-of-the-art centre currently houses more than 200 team members, including the company's NCA senior leadership team; the region’s leading chemists; IT and other technical experts, along with support functions. Construction of the 140,000-square-foot site began by Wacker’s developer and contractor Kirco-Manix in December 2020, and Wacker team members moved into the building in mid-April 2022, the company said in a media statement.

The $50-million-plus investment allows chemists, scientists and senior leadership that had previously worked out of three separate Michigan locations to collaborate in a single space and provides room for the expansion and growth expected by the global leader in silicones, polymers, polysilicon and bio-solutions. The innovation centre includes world-class labs; a full-service cafeteria; a 24/7 fitness centre; and open collaborative work spaces.

Wacker, a pioneer and global leader in chemical R&D and manufacturing, recently held a grand opening of its new innovation centre and regional headquarters in Ann Arbor. Corporate leadership hosted Michigan Governor Gretchen Whitmer, along with several other state, county and township officials, in conducting a ribbon-cutting ceremony and touring the site.#

Wacker will continue to produce elastomers, silicone fluids and silicone emulsions out of its existing operations in Adrian, Michigan, where the regional headquarters was located previously. The Adrian site, established in 1969, remains a growing base of operations for the approximately 275 employees managing production there for the company’s Wacker Silicones division.

“We are pleased to formally open this world-class innovation centre today to our valued partners. The site will serve as an important anchor for our growing operations across North and Central America. This area is home to dozens of research facilities and educational institutions, making it one of the leading communities in Michigan and the entire nation for R&D, enabling the company to network with, and recruit from among, the best high-tech talent in the nation,” Wacker Chemical Corporation president and CEO, David Wilhoit, said in a statement.

“The innovation centre will be Wacker’s new North American headquarters for a diverse and broad workforce and be a workspace for 300 Michiganders operating on the cutting edge of manufacturing and high-tech innovation. This facility is a talent magnet, showing other firms that Michigan is the obvious answer when deciding where to expand or move their business. Our position as a global epicentre for high-tech manufacturing and innovation is clearer than it has ever been thanks to companies like Wacker. Let’s keep working together to grow the economy, create good-paying jobs, and conduct ground-breaking research that will define the future—right here in Michigan,” Michigan governor, Gretchen Whitmer, said.

Sandler to display sustainable nonwovens at Techtextil 2022 in Germany

Freudenberg & its partners to participate in Techtextil Frankfurt