Ahead of the forthcoming Techtextil exhibition in Frankfurt from June 21-24, JEC World, held in Paris from May 3-5, highlighted how the composites industry has influenced many recent advances in fabric formation technologies for technical textiles. A report.

Innovation in fabric forming techniques over the past 20 years has been significantly driven by the need for advanced reinforcements and structural components for the composites industry.

3D weaving, braiding, multiaxial knitting, and most recently, automated fibre placement (AFP) and automatic tape laying (ATL) are technologies which are all now being widely employed in this field, with a major aim being to reduce waste – especially with expensive carbon fibre.

Such carbon fibre can be a valuable material for recycling, but it is obviously preferable not to create the waste in the first place.

By building up multiple layers of fabrics into pre-forms to be as close to the shape of the desired final composite component – known as ‘near-net shape’ structures – considerable material savings are achieved.

Carbon fibre is also an isotropic anisotropic material, which means that all fibres in a single layer have to point in the same direction as the force-lines through the material. This is something that is being greatly exploited in built-up reinforcement structures.

The density of carbon fibre is also considerably lower than that of steel, making it ideal for applications requiring low weight, and this has ensured its continuing success in aerospace applications. 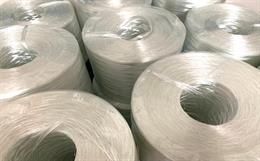 Nonwoven Products For Everyday Use