Home / Articles / Overview of disposable diaper parts and their purpose

Overview of disposable diaper parts and their purpose

This group primarily includes infants and young children, some elderly people, some with a physical or mental disability, people working in extreme conditions (e.g. astronauts) and also for pet animals. Mostly diapers are used for kids until they are potty trained, and also by adults who are incontinent/sick.

Disposable diapers are mostly made using the following components and materials:

Among all parts, four are very essential layers in a diaper (shown in Fig-1.). 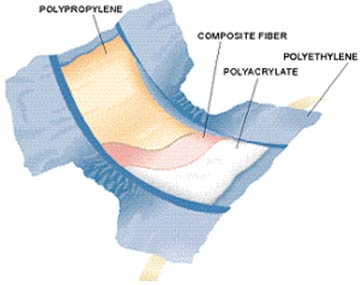 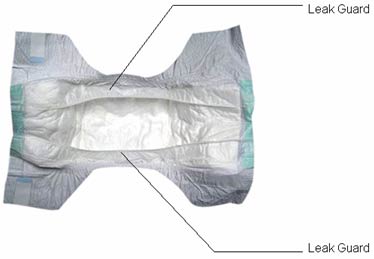 This is the back/bottom-most sheet of a typical disposable diaper. They are hydrophobic nonwoven films. This part of diaper is impermeable to liquid (i.e.urine). Some times polypropylene films may also be used. This part is responsible for preventing the urine from escaping through the diapers.

Sometimes this polyethylene back sheet is given breathable/cloth-like look using a thin polypropylene nonwoven sheet. This process is done by using either the hot melt process or the heat and pressure method with direct extrusion to the nonwoven.

Cloth-like back sheet of disposable diapers are not really made of woven cloths, but this is really made with the polypropylene non-woven films.

Hydrophobic polypropylene nonwovens are impermeable to liquids, and this is used in crotch region as leak guards (shown in Fig-2.). This feature is designed to prevent leakage through leg cuff area of diaper.

Hydrophilic polypropylene nonwovens are the liquid permeable top layer that comes in contact with the baby's skin (this is indicated by light orange colour in Fig-1.). This part allows the urine to pass through it and reach the absorbent core.

Most nonwovens used in diapers are made with the spun bonding process, which has good tensile strength and abrasive resistance. It is possible to use thermal bonded nonwovens also, as they are softer but they have lower resistance and strength. Trough Air Bonded nonwovens which are more lofty, can also be used.

Wood pulp fluff (shown in Fig-4.) is cellulose which is used as the core of the diaper to absorb liquids. It gives good absorbing capacity to the diaper. The pulp has qualities such as high ratio of fibres to weight, lower coarseness and shorter fiber length. It is also homogenous and uniform short fiber.

The capacity of normal wood pulp fluff is around 10 cc of water per gram of pulp when the diaper is not under pressure. But when subjected to 5 KPa of pressure its capacity becomes less than 2cc. Hence super absorbent polymer is also needed to hold the liquids under pressure.

These wood pulp sheets come from pine trees, which are generally obtained from the forests. Immediate absorption of wood pulp fluff is the reason for its usage in the disposable diapers. Liquids are absorbed in the void spaces between the fibres known as capillaries and it is also due to the surface tension angle between the water and the fibres. Typical fiber length for wood pulp fibres used in diapers is about 2.6 mm.

An alternative core material to this wood pulp is to use air laid synthetic fibres.  But still it is difficult for air laid synthetics to compete with pulp. Cellulose acetate, the material which is used in cigarette filters, are also used in some absorbent products.  Polypropylene fibres are also tried for absorbent core formation.

Super Absorbent Polymer or SAP is also known as Super Absorbent Material or SAM (shown in Fig-5.). It is used in the form of fine granules (like table salt).  It increases the retention capacity in a baby diaper. Thus helps to get the product to be thinner with good performance and less usage of wood pulp fibres. Chemical commonly used as SAP is sodium polyacrylate. When the SAP comes in contact with water, the sodium detaches itself, leaving only carboxyl ions. These carboxyl ions are negatively charged, hence they repel each other. Due to this SAP polymer unwinds and absorbs water, which is attracted by the sodium ions.

Now the polymer with water becomes gel, this is due to the cross-links which effectively leads to a three-dimensional structure and also due to its high molecular weight (i.e., above a million). Because of the polarity forces between the atoms, the hydrogen in the water (H-O-H) is trapped by the acrylate.

The super absorbent properties of SAP is affected by the electrolytes in the liquid, (urine contains 0.9% of mineral electrolytes), because they reduce polarity. Thus it will affect the super absorbent capacity which is required for liquid retention. So the diapers with SAP should never be tested with plain water, but with 0.9% saline solution.

The SAP is available in two different varieties. First type absorbs either higher amounts of liquids but has less retention and the other type absorbs lower amount of liquids but has very high retentions. It can be chosen according to requirement and desire. Mostly high capacity SAPs are used in diapers. Also, a surface cross linker can be added to the SAP polymer so that it will help to move the liquids during saturation and prevent gel blocks formation. This is because of the phenomenon that it is impossible to move the liquids once a SAP gets saturated.

The elastics may also be used at the side panels and also near the fastening tape area, to provide elasticity even at the fastening zone of the diaper. New generations of softer and stronger elastic materials are emerging to be used in diapers. 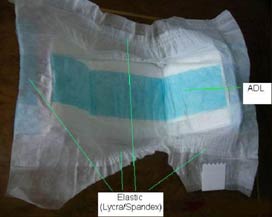 Fig-6b. Elastic at side panels of fastening tape 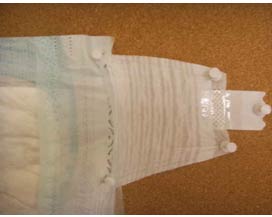 They are also known as Acquisition and Distribution Layer abbreviated as ADL. It is a intermediate layer used between the top polypropylene nonwoven sheet and the absorbent core (ADL is shown in Fig-6a., and 7). These may be used in full length or as a patch near the urine deposit zone. This layer gets significance only in thin/ultra thin Diapers, due to its property of moving the liquids quickly into the absorbent core and hence reducing the potential leakage.

The ADL gives some dry feel to the skin, because it provides an additional separation between the wet pad and the skin. ADL's are made of either trough air bond (TAB) nonwovens or of an aperture sheet (i.e.,made of perforated plastic film). Cheaper diapers may sometimes use the resin bonded nonwovens, but they give poor performance when compared to TAB nonwovens.

The diaper components are usually joined with these adhesives. These are mostly a mixture of resins, oils and tackifiers. The hot melt adhesives are applied in molten form and when it cools down it gives a better bonding force to join the parts of diaper.  Two types of adhesives are used in the disposable diapers. They are a construction adhesive, and an elastomeric adhesive. The construction adhesive is used to glue the back sheet and the nonwovens. The elastomeric adhesive is used to glue the leg and waist foam elastics with the nonwovens. The elastomeric adhesive has higher elasticity and bonding strength and also it is more expensive than construction adhesives. The ultra thin diapers need some extra joint effect at the wet core, so a special pad integrity adhesive is used to serve this purpose.

Generally fastener tapes used in diapers are either velcro tape type fasteners or stick tape type fasteners. Velcro (shown in Fig-9.) tape will give a good mechanical grip, which is also known as the "hook & loop fasteners". These Velcro tapes use lock loops and brush loops to give a soft but strong closure.

There are new versions of elasticized nonwoven Velcro tapes emerging to be used in diapers. Nowadays diapers are replacing with the new stretchable fastening systems that offer the same characteristics but less cost. 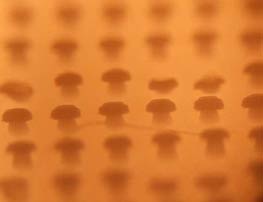 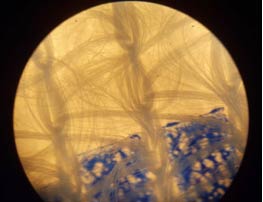 Nowadays several topical lotions are added to the nonwoven top sheet in order to create some product differentiation in market. Some of them are Aloe Vera, Vitamin E, Petrolatum, Almond Oil, Vitamin D, Oat Extract, Jojoba, etc. There is also another trend to use antibacterial lotions such as tertiary ammonia or silver salt compounds.

Fig-10. A Typical Disposable Diaper with its significant parts labeled 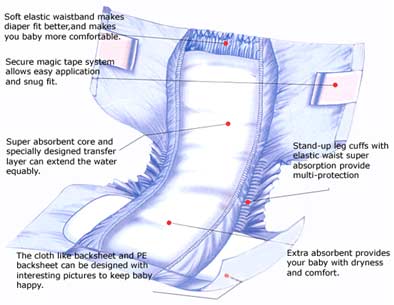 Fig-10 shows the components of the commercially available disposable baby diapers, and also their purposes and properties are briefly discussed above. In future there is very good scope for these hygiene nappies to be subjected for several design or technological changes, thus making easy handling for the consumer. Also comfort and safety requirements will enhance the demand for ecofriendly and environment friendly diapers in upcoming days.

The author is in the Final Year of M.Tech (Apparel Technology and Management) in Kumaraguru College of Technology, Coimbatore. 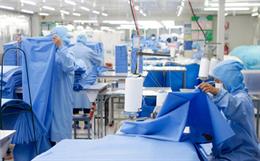 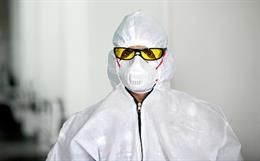 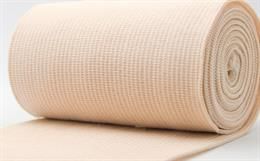