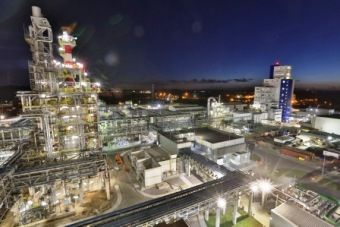 According to a BASF press release, these are the first of its kind plants for producing acrylic acid and superabsorbent polymers in South America.

“The complex has a capacity to produce 160,000 tons of acrylic acid per year and the investment of more than €500 million is the largest in BASF’s more than century-long history in South America,” it said.

“BASF is the global leader in the acrylic acid value chain and this major investment will further strengthen our position in the growing South American market,” Michael Heinz, board member at BASF said.

Superabsorbent polymers are important products in the acrylic acid value chain and are used in the production of baby diapers and other hygiene products.

“This complex will secure national and regional supply of products that are currently imported,” said Ralph Schweens, president of BASF in South America.

“In addition, it will positively impact the local economy by encouraging investment and innovation in the region and attracting new companies to the Camaçari industrial area,” he added.

The construction of the new complex started in March 2012 and the three plants at the complex have created 230 direct jobs and 600 indirect jobs in the region.

BASF informed that it is setting the highest quality standards in Brazil, after recently having started up similar plants for acrylic acid and superabsorbent polymers in Nanjing, China.

Brazilian employees were trained at BASF sites in the United States, Belgium and China and are now bringing their expertise to South America.

In addition to the new Camaçari complex, BASF will convert its butyl acrylate plant at its existing site in Guaratinguetá near São Paulo to produce 2-ethylhexyl acrylate.

2-ethylhexyl acrylate is an important raw material for the adhesive and coatings industries and this too will be the first plant of its kind in South America.

“Production is expected to start in 2016 and the raw material for producing 2-ethylhexyl acrylate; acrylic acid will be sourced from the Camaçari plant,” BASF too added. (AR)