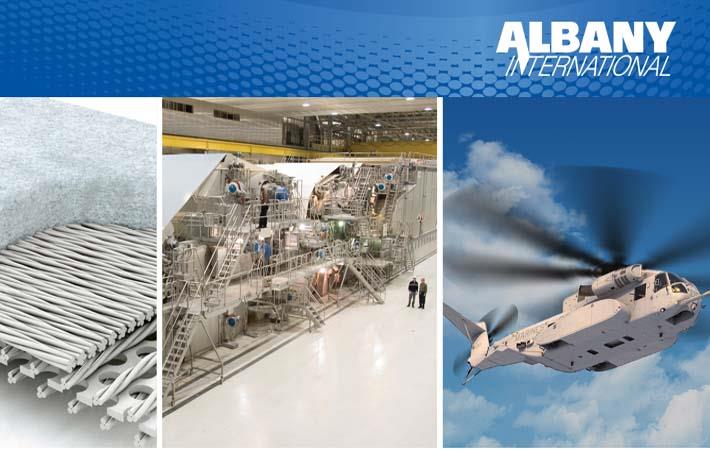 Courtesy: Albany
Albany International Corp (AEC), a global advanced textiles processing company, has reported net income of $28.2 million in Q3 2018 compared to $15.3 million in Q3 2017. The net income increased by $0.7 million as a result of adoption of new revenue recognition standard (ASC 606). Net sales were $253.3 million, an increase of 14 per cent compared to 2017.
In machine clothing (MC), excluding the impact of ASC 606 and currency translation effects, net sales increased 4.1 per cent compared to Q3 2017. Globally, machine clothing sales grew in the packaging, tissue, publication and pulp grades, with particular strength in South America and Asia.
"Q3 was another quarter of strong, improving performance for AEC, with significant growth in net sales, operating income and adjusted EBITDA compared to Q3 2017. Net sales, excluding the impact of ASC 606 and currency translation effects, increased 40 per cent, while profitability continued to improve compared to last year," said Olivier Jarrault, CEO of AEC.
"So in summary, this was another very good quarter for the company, with continued outstanding financial performance in MC and solid sales and income growth in AEC. MC is firmly on track for full-year," he added.
"AEC is expected to continue its strong performance in Q4. As a result, we expect an increase in full-year 2018 net sales above the upper end of the 20-30 per cent range we discussed in past quarters, while adjusted EBITDA as a percentage of net sales should show strong incremental improvement compared to 2017. In addition, we continue to be on track toward our goal of 18-20 per cent adjusted EBITDA as a percentage of sales in 2020," he concluded. (PC)