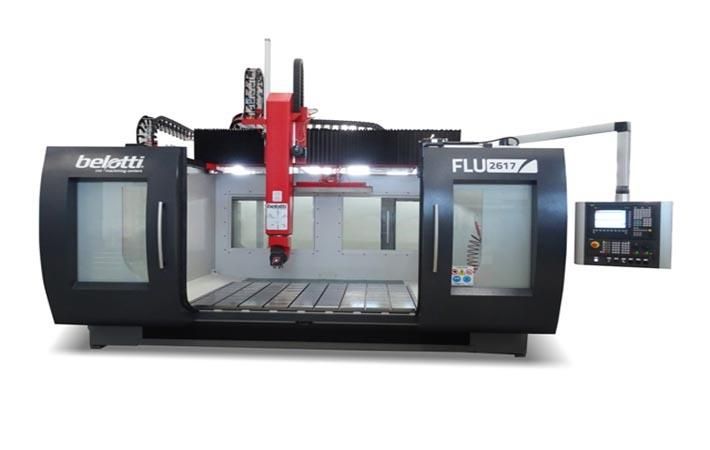 Pic: Belotti
Belotti has announced the opening of Belotti America that will be headquartered next to DFW Airport in Irving, Texas. Following the successful launch of Belotti Deutschland and the celebration of its 40th anniversary of designing 3- and 5-axis CNC centres, the new subsidiary intends in supporting and growing its customer base in North America.

The new branch is also the consistent evolution of the group’s strategy for its key markets, such as gradually building a direct presence besides the already existing locally-represented distribution model. Building on Belotti’s 40-years of success, Belotti America opens their doors with an enviable position in the sectors of aerospace, automotive, marine, space and transportation, the company said in a press release.

Most of the machines that are built by Belotti are medium to large sized 5-axis machining centres and are used to mill, trim and drill composites, light alloys, plastics and tooling and modelling board. Belotti range also includes medium to large sized 3-axis machining centres, often equipped with glass scales to further enhance their long-term performance. Some of these high performance 3 and 5-axis machines are used for machining aluminium and technical plastics sheets for packaging, aerospace, and transportation applications as well as other mechanical engineering components and measurement tools, according to a press release by Belotti.

Through prior relationships with distributors in Canada, Mexico, and the US, the company already has a very nice install base in these markets and has plans to expand on it. The new subsidiary will follow the Belotti path with the ultimate goal of helping existing and new customers increase their productivity and profitability.

“Our new location is perfectly centred to serve all of our North American customers and prospects and with DFW Airport being one of the busiest airports in the world we will be well positioned to serve our customers efficiently when the need arises for parts or service. The facility will reinforce the sales, services and installation support in this market, being home to customer service, parts, sales, administration, and will include a showroom for demonstrations and trainings to customers, sales representatives, field service engineers and apprentices. We have great expectations for the American market, especially in aerospace, where we already have a good history. Through our direct presence, we aim at becoming an effective system-supplier, not only proposing milling machine tools, but actually bringing the extensive portfolio of our advanced solutions dedicated to aeronautical applications,” Loris Valsecchi, sales director of Belotti.

“Reliability has been a cornerstone of the Belotti philosophy from day one. It really defeats the purpose to design and build a highly accurate machine tool, which can provide an excellent surface finish, only to have it fail prematurely. Therefore we include features such as pressurised bellow covers and effective dust collection on well-engineered machines to provide the Best of Both Worlds,” Todd Hammer, president and CEO of the newly established subsidiary said.

Belotti has announced the opening of Belotti America that will be headquartered next to DFW Airport in Irving, Texas. Following the successful launch of Belotti Deutschland and the celebration of its 40th anniversary of designing 3- and 5-axis CNC centres, the new subsidiary intends in supporting and growing its customer base in North America.
Machinery