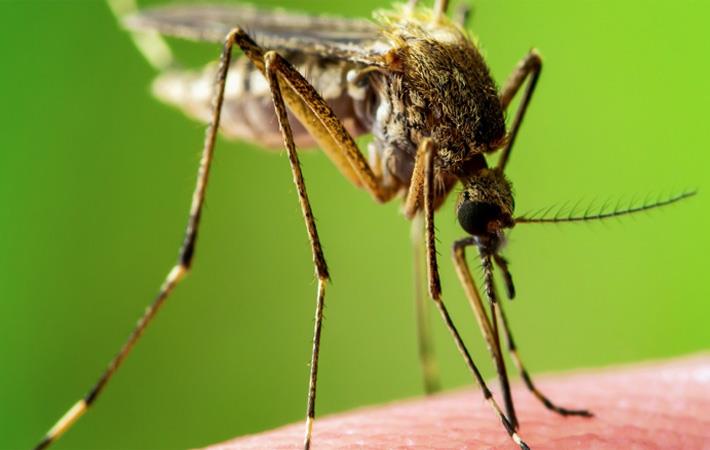 Pic: Brown University
Scientists in Brown University have shown that graphene sheets may be useful in preventing mosquito bites. They showed that graphene can block the signals mosquitoes use to identify a blood meal, potentially enabling a new chemical-free approach to mosquito bite prevention. Graphene also acts as a barrier that mosquitoes are unable to bite through.

The nanomaterial graphene has received significant attention for its potential uses in everything from solar cells to tennis rackets. But a new study by Brown University researchers finds a surprising new use for the material: preventing mosquito bites.

In a paper published in Proceedings of the National Academy of Sciences, researchers showed that multilayer graphene can provide a two-fold defence against mosquito bites. The ultra-thin yet strong material acts as a barrier that mosquitoes are unable to bite through. At the same time, experiments showed that graphene also blocks chemical signals mosquitoes use to sense that a blood meal is near, blunting their urge to bite in the first place. The findings suggest that clothing with a graphene lining could be an effective mosquito barrier, the researchers say.

“Mosquitoes are important vectors for disease all over the world, and there’s a lot of interest in non-chemical mosquito bite protection,” said Robert Hurt, a professor in Brown’s School of Engineering, leader of Brown's Superfund Research Programme and senior author of the paper. “We had been working on fabrics that incorporate graphene as a barrier against toxic chemicals, and we started thinking about what else the approach might be good for. We thought maybe graphene could provide mosquito bite protection as well.”

To find out if it would work, the researchers recruited some participants willing to get a few mosquito bites. The participants placed their arms in a mosquito-filled enclosure so that only a small patch of their skin was available to the mosquitoes for biting. The mosquitoes were bred in the lab so they could be confirmed to be disease-free.

Graphene was found to be a bite deterrent. When skin was covered by dry GO films, participants didn’t get a single bite, while bare and cheesecloth-covered skin was readily feasted upon. What was surprising was that the mosquitoes completely changed their behaviour in the presence of the graphene-covered arm, the researchers said.

“With the graphene, the mosquitoes weren’t even landing on the skin patch — they just didn’t seem to care,” said Cintia Castillho, a PhD student at Brown and the study’s lead author. “We had assumed that graphene would be a physical barrier to biting, through puncture resistance, but when we saw these experiments we started to think that it was also a chemical barrier that prevents mosquitoes from sensing that someone is there.”

To confirm the chemical barrier idea, the researchers dabbed some human sweat onto the outside of a graphene barrier. With the chemical ques on the other side of the graphene, the mosquitoes flocked to the patch in much the same way they flocked to bare skin.

Other experiments showed that GO can also provide puncture resistance — but not all the time. Using a tiny needle as a stand-in for a mosquito’s proboscis, as well as computer simulations of the bite process, the researchers showed that mosquitoes simply can’t generate enough force to puncture GO. But that only applied when the GO is dry. The simulations found that GO would be vulnerable to puncture when it was saturated with water. And sure enough, experiments showed that mosquitoes could bite through wet GO. However, another form of GO with reduced oxygen content (called rGO) was shown to provide a bite barrier when both wet and dry.

A next step for the research would be to find a way to stabilise the GO so that it’s tougher when wet, Hurt says. That’s because GO has a distinct advantage over rGO when it comes to wearable technology.

“GO is breathable, meaning you can sweat through it, while rGO isn’t,” Hurt said. “So our preferred embodiment of this technology would be to find a way to stabilise GO mechanically so that is remains strong when wet. This next step would give us the full benefits of breathability and bite protection.”

The study suggests that properly engineered graphene linings could be used to make mosquito protective clothing, according to the team. (SV)

Scientists in Brown University have shown that graphene sheets may be useful in preventing mosquito bites. They showed that graphene can block the signals mosquitoes use to identify a blood meal, potentially enabling a new chemical-free approach to mosquito bite prevention. Graphene also acts as a barrier that mosquitoes are unable to bite through.
Clothing Textiles