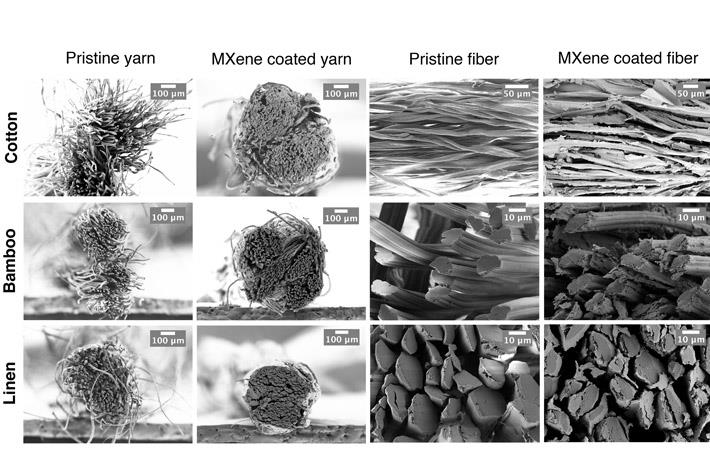 Pic: Drexel University
Scientists at Drexel University have developed a method to coat cellulose yarn with flakes of a type of conductive, two-dimensional material, called MXene, to impart it the conductivity and durability it needs to be knit into functional fabrics. With this, scientists are one step closer to producing wearable devices that are both functional and fashionable.

Producing functional fabrics that perform all the functions desired, while retaining the characteristics of fabric has been a challenge. Two groups of researchers at Drexel University — one, who is leading the development of industrial functional fabric production techniques, and the other, a pioneer in the study and application of one of the strongest, most electrically conductive super materials in use— believe they have a solution.

They have improved a basic element of textiles - yarn. By adding technical capabilities to the fibres that give textiles their character, fit and feel, the team has shown that it can knit new functionality into fabrics without limiting their wearability.

In a paper published in the journal Advanced Functional Materials, the researchers, led by Yury Gogotsi, Distinguished University and Bach professor in Drexel’s College of Engineering, and Genevieve Dion, a professor in Westphal College of Media Arts and Design and director of Drexel’s Centre for Functional Fabrics, showed that they can create a highly conductive, durable yarn by coating standard cellulose-based yarns with a type of conductive two-dimensional material called MXene.

“Current wearables utilise conventional batteries, which are bulky and uncomfortable, and can impose design limitations to the final product,” they say. “Therefore, the development of flexible, electrochemically and electromechanically active yarns, which can be engineered and knitted into full fabrics provide new and practical insights for the scalable production of textile-based devices.”

The team reported that its conductive yarn packs more conductive material into the fibres and can be knitted by a standard industrial knitting machine to produce a textile with top-notch electrical performance capabilities. This combination of ability and durability stands apart from the rest of the functional fabric field today.

Most attempts to turn textiles into wearable technology use stiff metallic fibres that alter the texture and physical behaviour of the fabric. Other attempts to make conductive textiles using silver nanoparticles and graphene and other carbon materials raise environmental concerns and come up short on performance requirements. And the coating methods that are successfully able to apply enough material to a textile substrate to make it highly conductive also tend to make the yarns and fabrics too brittle to withstand normal wear and tear.

“Some of the biggest challenges in our field are developing innovative functional yarns at scale that are robust enough to be integrated into the textile manufacturing process and withstand washing,” Dion said. “We believe that demonstrating the manufacturability of any new conductive yarn during experimental stages is crucial. High electrical conductivity and electrochemical performance are important, but so are conductive yarns that can be produced by a simple and scalable process with suitable mechanical properties for textile integration. All must be taken into consideration for the successful development of the next-generation devices that can be worn like everyday garments.”

Dion has been a pioneer in the field of wearable technology, by drawing on her background on fashion and industrial design to produce new processes for creating fabrics with new technological capabilities. She teamed with Gogotsi, who is a leading researcher in the area of two-dimensional conductive materials, to approach the challenge of making a conductive yarn that would hold up to knitting, wearing and washing.

Gogotsi’s group was part of the Drexel team that discovered highly conductive two-dimensional materials, called MXenes, in 2011 and have been exploring their exceptional properties and applications for them ever since. His group has shown that it can synthesise MXenes that mix with water to create inks and spray coatings without any additives or surfactants, which makes them a natural candidate for making conductive yarn that could be used in functional fabrics.

“Researchers have explored adding graphene and carbon nanotube coatings to yarn, our group has also looked at a number of carbon coatings in the past,” Gogotsi said. “But achieving the level of conductivity that we demonstrate with MXenes has not been possible until now. It is approaching the conductivity of silver nanowire-coated yarns, but the use of silver in the textile industry is severely limited due to its dissolution and harmful effect on the environment. Moreover, MXenes could be used to add electrical energy storage capability, sensing, electromagnetic interference shielding and many other useful properties to textiles.”

In its basic form, titanium carbide MXene looks like a black powder. But it is actually composed of flakes that are just a few atoms thick, which can be produced at various sizes. Larger flakes mean more surface area and greater conductivity, so the team found that it was possible to boost the performance of the yarn by infiltrating the individual fibres with smaller flakes and then coating the yarn itself with a layer of larger-flake MXene.

The team created the conductive yarns from three common, cellulose-based yarns: cotton, bamboo and linen. They applied the MXene material via dip-coating, which is a standard dyeing method, before testing them by knitting full fabrics on an industrial knitting machine — the kind used to make most of the sweaters and scarves.

Each type of yarn was knit into three different fabric swatches using three different stitch patterns — single jersey, half gauge and interlock — to ensure that they are durable enough to hold up in any textile from a tightly knit sweater to a loose-knit scarf.

“The ability to knit MXene-coated cellulose-based yarns with different stitch patterns allowed us to control the fabric properties, such as porosity and thickness for various applications,” the researchers write.

To put the new threads to the test in a technological application, the team knitted some touch-sensitive textiles. Not only did the MXene-based conductive yarns hold up against the wear and tear of the industrial knitting machines, but the fabrics produced survived a battery of tests to prove its durability. Tugging, twisting, bending and — most importantly — washing, did not diminish the touch-sensing abilities of the yarn, the team reported — even after dozens of trips through the spin cycle.

The team suggests that the ultimate advantage of using MXene-coated conductive yarns to produce these special textiles is that all of the functionality can be seamlessly integrated into the textiles. So instead of having to add an external battery to power the wearable device, or wirelessly connect it to one’s smartphone, these energy storage devices and antennas would be made of fabric as well — an integration that, though literally seamed, is a much smoother way to incorporate the technology.

“Electrically conducting yarns are quintessential for wearable applications because they can be engineered to perform specific functions in a wide array of technologies,” they write.

Dion’s team at the Center for Functional Fabrics is already putting this development to the test in a number of projects, including a collaboration with textile manufacturer Apex Mills — one of the leading producers of material for car seats and interiors. Gogotsi suggests the next step for this work will be tuning the coating process to add just the right amount of conductive MXene material to the yarn for specific uses.

“With this MXene yarn, so many applications are possible,” Gogotsi said. “You can think about making car seats with it so the car knows the size and weight of the passenger to optimise safety settings; textile pressure sensors could be in sports apparel to monitor performance, or woven into carpets to help connected houses discern how many people are home — your imagination is the limit.”

Scientists at Drexel University have developed a method to coat cellulose yarn with flakes of a type of conductive, two-dimensional material, called MXene, to impart it the conductivity and durability it needs to be knit into functional fabrics. With this, scientists are one step closer to producing wearable devices that are both functional and fashionable.
Smart Textiles