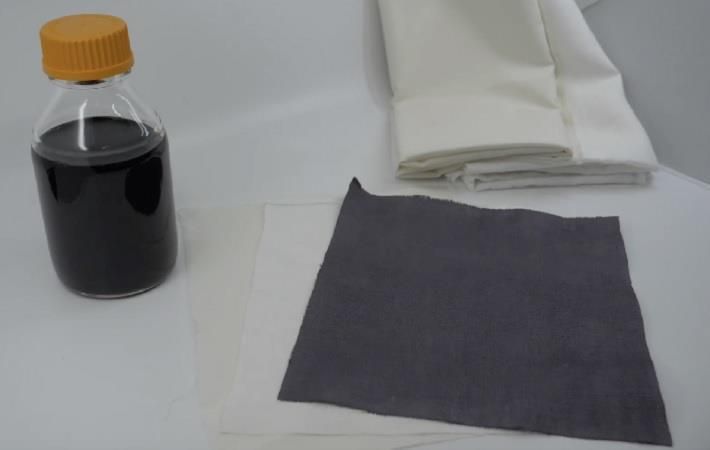 Pic: Drexel University
Scientists at Drexel University’s College of Engineering have found that cotton or linen fabric, when coated with a conductive, two-dimensional material called MXene, become highly effective at blocking electromagnetic waves and potentially harmful radiation. Therefore, MXene can be used to protect wearable devices and electronic gadgets, and even people.

These fabrics could also be deployed in national defence organisations to shield devices from tracing and hacking and to protect people from strong microwave radiation – the kind that might have been used against American and Canadian diplomats according to recent reports.

“Wearable devices will need shielding from the electromagnetic interference (EMI) regularly produced by mobile devices, and that shielding should be integrated as part of the garment,” said Yury Gogotsi, Distinguished University and Bach professor at Drexel, who led research recently published in the materials science journal Carbon.

“We have known for some time that MXene has the ability to block electromagnetic interference better than other materials, but this discovery shows that it can effectively adhere to fabrics and maintain its unique shielding capabilities,” said Gogotsi.

The interference comes from residual electromagnetic fields produced by electronics devices. Users notice it as a buzz, a slowing or temporary stall in a device’s function. It’s a momentary inconvenience, but these moments are becoming more frequent with expanded use of mobile devices and connected technology – including wearables.

Improving the design of these devices, according to Gogotsi, entails using a shielding material to contain electromagnetic field generated by the device, as well as protecting it from interference produced by other devices. Gogotsi’s team, which first produced and studied the conductive two-dimensional MXene materials nearly a decade ago, has been testing MXene coatings for this role, with promising results.

“MXenes are well-suited for use as shielding because they can be stably produced as a spray coating, an ink or a paint, so they can be applied to textiles without adding much weight or taking up more room,” Gogotsi said. “We have also discovered that MXene shielding can absorb and reflect electromagnetic waves, so it not only protects the wearable devices and electronic gadgets, but also protects people from strong electromagnetic field.”

The researchers’ most recent finding shows that dip-coating regular cotton or linen fabric in a MXene solution will turn it into an equally formidable shielding material – blocking electromagnetic interference (EMI) at greater than 99.9 per cent effectiveness.

MXene flakes suspended in solution naturally adhere to the fibres in conventional cotton and linen fabrics because of their electric charge. This produces a thorough and durable coating, without the need for the pre- or post-treatment processes to produce most commercial conductive yarns and fabrics.

As part of the study, the MXene-coated fabrics were tested after being stored under normal conditions for two years and they showed only a slight drop in shielding efficiency – roughly 10 per cent.

“This work provides a much-improved alternative to current EMI shielding textiles,” said Simge Uzun, a doctoral student in Gogotsi’s research group, who conducted this research as a part of her PhD programme. Not only do MXene-coated fabrics exceed the performance of commercial metal-coated fabrics, but they can be sustainably produced.

The research was supported by the US Department of Energy.

Scientists at Drexel University's College of Engineering have found that cotton or linen fabric, when coated with a conductive, two-dimensional material called MXene, become highly effective at blocking electromagnetic waves and potentially harmful radiation. Therefore, MXene can be used to protect wearable devices and electronic gadgets, and even people.
Protective Textile