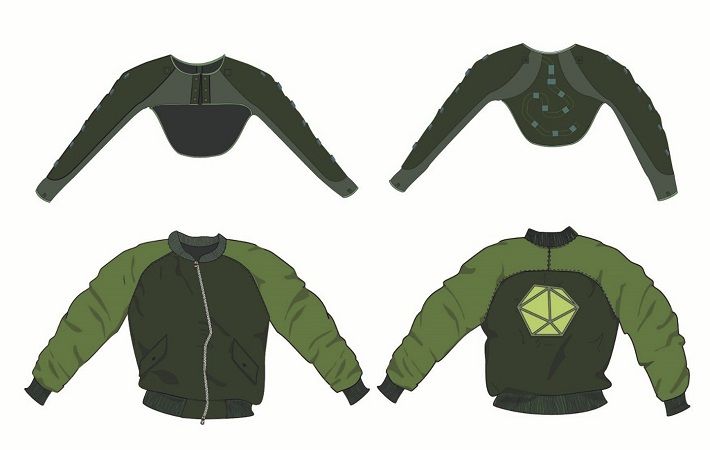 Project results of the TPL in cooperation with the Hans Riegel Foundation: Interactive jacket controls LEDs through arm movements. Pic: Textile Prototyping Lab
Fraunhofer IZM in Berlin has set up a new Textile Prototyping Lab (TPL) with a view to create creative high-tech textiles. The lab varies from the style of usual research laboratories by its design, and displays patterns, seams and mannequins. In collaboration with Weißensee Kunsthochschule Berlin, TPL is busy creating textile-integrated electronics.

Textile-integrated electronics have applications in different areas from architecture to medicine.

The Textile Prototyping Lab not only offers consulting and equipment for electronic textiles, but can also be used as a modular space. Since its opening, the lab has been available to designers and product developers to prototype individual visions in the field of e-textiles. The possibilities are virtually unlimited. From interfaces between textiles and electronics to the testing of process chains, parts of the laboratory or even the entire laboratory can be used freely. In addition to the pure development and construction work, the premises can be converted in a few moves and repurposed for workshops or exhibitions.

Malte von Krshiwoblozki, who is providing scientific support for the project at Fraunhofer IZM, cited other advantages: “Not only the modular workstations and the meeting area are attractive for joint project work, especially the machinery offers a wide range for interested parties. The ‘sewing and embroidery’ work area, for example, is equipped with several sewing machines as well as a computer-controlled embroidery machine. It thus becomes central to the TPL, as textile finishing with small-format machines is the focus of this lab's work.” Another work area covers “Cutting and Separating” with a laser cutter and a cutting plotter. In addition, there are several presses and laminators, a soldering station and a 3D printer.

In the TPL, beginners can also try their hand at e-textiles and expand their knowledge. The prototyping kit developed at Fraunhofer IZM, which includes a series of electronic modules, LEDs and sensors that can be embroidered by hand as well as by machine, is particularly helpful in this regard.

“For particularly durable electronic textiles, the textile bonder developed and built by Fraunhofer IZM researchers can also be used in cooperative projects of the Textile Prototyping Lab. The versatile modules of the prototyping kit are deliberately designed so that integration into the textile can take place not only with classic textile technology such as embroidery during the prototyping phase, but also for subsequent, more industrial implementations using the textile bonder. In keeping with the motto ‘sharing is caring’ and the principle of interdisciplinarity, we at Fraunhofer IZM are available to provide advice and support during the realisation of the textile projects, so that the artists' ideas can be enriched using such new technology,” said Krshiwoblozki.

Even before the opening of the laboratory, the collaboration between the Weißensee Kunsthochschule Berlin and Fraunhofer IZM had already produced developments that combine art and research in revolutionary ways. For example, a light rail for lamps that is made of a soft and conductive textile belt was created in cooperation with the designer Stefan Diez. For the Hans Riegel Foundation's Touch Tomorrow educational project, an interactive jacket was developed that can control the colour of integrated LEDs via arm movements.

Fraunhofer IZM in Berlin has set up a new Textile Prototyping Lab (TPL) with a view to create creative high-tech textiles. The lab varies from the style of usual research laboratories by its design, and displays patterns, seams and mannequins. In collaboration with Weißensee Kunsthochschule Berlin, TPL is busy creating textile-integrated electronics.
Smart Textiles