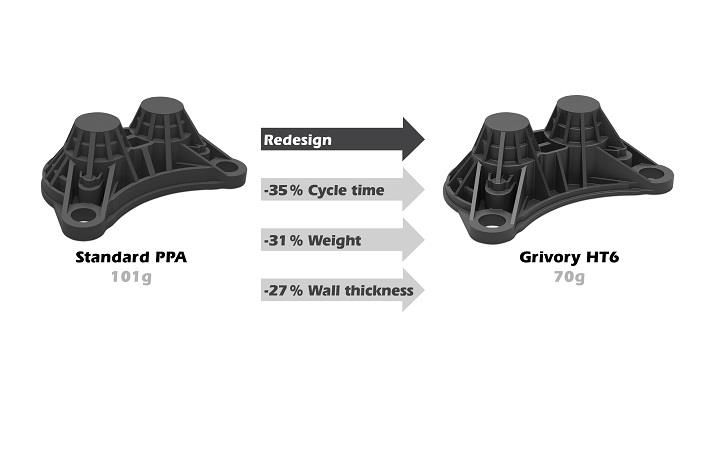 In 1994, EMS-Grivory launched the market introduction of the high-temperature material Grivory HT. With this tried and tested product, the company has become a leader in Europe and offers the widest PPA product portfolio worldwide. With Grivory HT6, EMS-Grivory has launched a new Grivory HT-product line with significantly increased temperature performance onto the market, the company said in a media statement.

Grivory HT6 is utilised everywhere where conventional PPAs reach the limits of their mechanical load capacity. With the comparable melting point as Grivory HT1, Grivory HT6 provides significantly higher performance at the same temperature. The E-modulus at 140 °C was increased by 50 per cent and the heat distortion temperature (HDT/C) by 50 °C to 250 °C. Grivory HT6 has the best creep resistance of all PPAs on the market. New components can be designed with thinner wall strengths, allowing part costs and weight savings to be achieved. With the same geometry, Grivory HT6 has a significantly higher load capacity at higher temperatures.

Target applications for Grivory HT6 are applications in automotive construction such as clutch systems, gears, structural components, and brackets in the engine compartment as well as components in the industry and consumer good sectors with the highest mechanical resistance and creep resistance. (GK)

EMS-Grivory, a leading manufacturer of high-performance polymers, has renamed the Grivory HT 'High Temperature' as Grivory HT6. The company first presented the product at the K 2016 expo. The product line is the next generation of Grivory HT. EMS-Grivory is part of the high performance polymer business unit of the EMS Group and employs more than 800 people.
Automobile Textiles