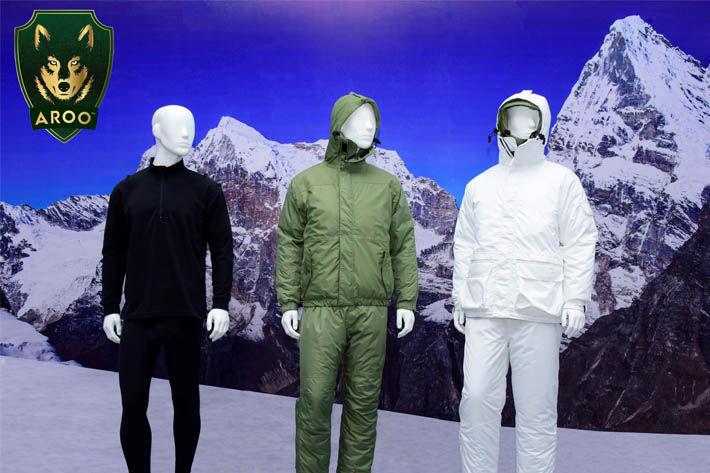 Pic: PR Newswire
Aroo is the first defence start-up that creates the intellectual property in specialised defence clothing and gear for the Indian Army. Aroo was started by Rohit Bedi and Munish Hinduja, in the defence space for apparel and gear. The company is developing ECWCS (Extreme Cold Weather Clothing System) and other specialised defence clothing for the army.

Aroo’s business approach is unique as it creates the products and applications for a specialised category of clothing and gear and then partners with the most capable OEM (original equipment manufacturer) to supply the product to the armed forces. Aroo’s first product was ECWCS where it passed field trials in 2017 and is currently manufacturing this product in India through its OEM based out of Bengaluru.

ECWCS is a 3-layer modular clothing system worn together, which is designed to operate in temperatures of up to -50 degrees Celsius. This product is used by Indian soldiers at high altitude regions including the Siachin Glacier which is the highest battlefield in the world. This clothing system was being imported for over 25 years. Aroo can, with pride comment that Aroo ECWCS outperforms the imported clothing systems provided to the Indian Army. It is also at a lower cost thus providing savings to the Indian government. Furthermore, the Indian Army is no longer dependent on foreign companies for this life-saving apparel.

Aroo is the first defence start-up that creates the intellectual property in specialised defence clothing and gear for the Indian Army. Aroo was started by Rohit Bedi and Munish Hinduja, in the defence space for apparel and gear. The company is developing ECWCS (Extreme Cold Weather Clothing System) and other specialised defence clothing for the army.

Aroo is also in advanced field trials with the Indian Army for the new Trouser ECC (extreme cold clothing) which operates in temperatures up to -30 degrees Celsius, the company said in a media statement.

“We were inspired by the government’s policies of ‘Make in India’. Our vision started with the Indian government's focus to promote the indigenisation of key imported products to decrease the dependencies on imports. Our mission is to provide world-class protection solutions for our ‘Jawans’, and our ambition is to exceed any world manufacturer in terms of product, quality and pricing. With the government’s initiative and thrust of encouraging Indian defence manufacturing. Aroo realised the potential in this segment because a large portion of the special clothing and mountain equipment (SCME) was being imported into the country,” Rohit Bedi, co-founder Aroo, said in a statement.

“The manufacturing process designed by AROO is focused on creating a defect-free product. The manufacturing lines at our OEM’s facility combined with our quality standards and rigorous raw material testing conducted at our OEM’s in-house testing facility, provide us with real-time product performance, with an eye on the CLO value (warmth level) and waterproofness of the garment our production supply outperform foreign specifications by 20 per cent to 75 per cent on key performance parameters,” Munish Hinduja, co-founder Aroo, said.

“Aroo creates high-performance military-grade textiles with a functional design sensibility that provides comfort, performance, and protection to the end-user. The product's complexity requires a high level of technical ability in sewing and apparel construction. Our OEM for ECWCS has specialised infrastructure for seam sealing, sewing, and testing at both the textile and garment manufacturer levels,” Hinduja added.