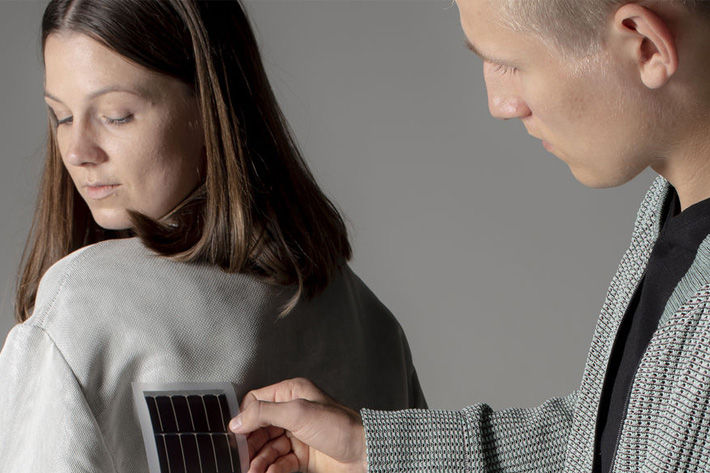 Pic: Aalto University
Researchers at Finland’s Aalto University’s departments of physics and design have developed a method of adhering solar cells to textiles that makes them resistant to machine-wash, and, at the same time, makes them less of an aesthetic problem. During the three-year ‘Sun-powered Textiles’ project, they also made the solar cell-infused textiles recyclable.

The machine-washability of commercially available solar cells hasn’t been studied previously to this extent.

The discrete nature of the cells protects them, and makes the clothes more attractive, the researchers say. Promising applications include work and outdoor clothing, and curtains which react to changes in the amount of light, a press release from the university said.

Researchers at Finland's Aalto University's departments of physics and design have developed a method of adhering solar cells to textiles that makes them resistant to machine-wash, and, at the same time, makes them less of an aesthetic problem. During the three-year 'Sun-powered Textiles' project, they also made the solar cell-infused textiles recyclable.#

In previous studies, solar cells have been installed on the surfaces, layered on top, or weaved into the threads of textiles.

”We hypothesised that the solar cell structure might break down in the wash as the cells weren’t designed to be machine-washable. The washing is a stressful process where the textiles and cells are subject to pressure and collisions, especially during spinning,” says Elina Ilen, project specialist at the university’s department of design.

Physics researcher Farid Elsehrawy then measured the output of the solar cells after each round in a washing machine. Five of the eight samples retained their efficiency, and three lost about 20 per cent of their power. None of the cells or the textiles were damaged during the process.

”Now that the solar cell laminated between textiles has been proved to be machine-washable, we have to protect the rest of the components. Our idea is that all of the electric components of the smart textile could be in the same container with the solar cell. That would give us a machine-washable electronic device that’s embedded in textiles and never needs to have its its battery charged or replaced,” says Janne Halme, lecturer at the university’s department of applied physics.

Any solar cell placed under the textile it adheres to has to have a significantly larger surface area than a cell that’s placed on top. A piece of regular fabric eats up roughly 70 per cent of a cell’s capacity, with a more porous fabric the percentage is smaller.

Key factors in the ability of textiles to let light through them include the material, transparency and crosscut of the fibre, structure of the threads, thickness and weave of the fabric, colours and the finish. Light colours transmit light better than dark colours, but a pitch-black and completely opaque fabric can also work.

The commercial solar cells used in the study comprised of a single crystal and were made of silicon. They can detect light that is invisible to the naked eye, which is what most of sunlight actually is.

Hiding the textile eats up some of the solar cell’s power but improves its durability, as it is better protected from the outside world.

The researchers used textiles whose fibres were made of only a single material, and thus could be recycled as efficiently as possible. Electronic components can be removed from the fabric simply by first applying heat and then tearing them off.

A crucial aspect is how frequently the application sends data. The most energy-hungry functions include sending information, doing calculations and projecting on screens. That is why solar cells hidden in textiles won’t be enough to charge a smartphone or a smartwatch but are suitable for things like measuring temperature and humidity.

The research team thinks that work clothing is the most potential application for solar cell textiles right now. They are thicker than regular clothes, so the cells have limited impact on the clothing’s look and feel.

”Curtains are another great way to collect solar energy. They could detect the amount of light and adjust themselves accordingly,” says Ilen.

US’ Kindthread names Angela Mahoney as head of stores, Scrubs & Beyond