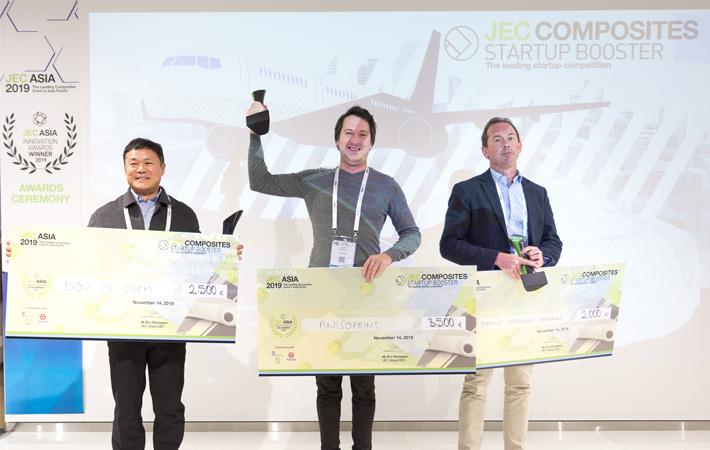 Pic: JEC Group
After three days of demonstrating the bright future ahead of composites, JEC Asia 2019 welcomed more than 200 exhibitors showcasing the latest innovations to more than 6,600 attendees from 49 countries in Seoul. From global brands to visionary startups, these companies set the composite world abuzz with the promise of innovation, knowledge, and networking.

Thanks to JEC Asia platform, the group were able to sign three major MOUs. The first one was between Jeonbuk region and Korea International Trade Association (KITA), the second one between Korea Pallet Pool Co, Jeonbuk province and Hankuk Carbon. And the third one was between Pitchcable Inc, Jeonbuk province and BSM. These agreements reflect the national ‘Gloden Triangle’ composites strategy announced in August by Moon Jae-in, president of South Korea. Major economic investments of 7 to 8 trillion won ($5.82 to 6.66) will support this strategy in the next seven years to structure and reinforce the local composites industry.

Within this context, after three successful JEC Asia shows in Seoul, Pierrejean officially announced the new name of the event, JEC Korea, as of 2020, in order to promote the Korean composites sector and also to reinforce Seoul’s positioning as the place to meet for the composites industry in the Asia Pacific region.

This strategic positioning has already been confirmed this year by the presence of many foreign government representatives: Philippe Lefort, French ambassador to Korea, Alexander Renner, head of the scientific affairs division of the German Embassy in Seoul, and Giampiero Valeo, commercial attache of the Italian Embassy in Seoul.

JEC Asia 2019 held a robust conference programme starting with the 14th International Carbon Festival, the symposium on carbon materials, and composite technologies in partnership with Kctech. A total of forty speakers from Korea and across the world gathered to express their views and share their visions in the form of keynote presentations on composites applied to automotive and aeronautics. Experts from global companies such as Hyundai Motor Group, Chomarat, Solvay Ventures, Airbus, Composites United, and NIO could be found among the speakers.

JEC Group is continuously sourcing innovations and promoting them. Its different programmes ? Startup Booster competition, the Innovation Planet, the Students Program, and the JEC Innovation Awards – enable innovative global composite projects, as well as fruitful collaborations between different players in the value chain.

JEC Startup Booster competition was held for the first time in Asia this year. Five out of the ten finalists are Korea-based, reflecting once again the local economic dynamism. The competition was a great success and rewarded the following startups: Imagine Intelligent Materials (Australia- Bronze award), Dou Ys’ Chem (South Korea - Silver award), and Anisoprint (Russia - Gold award). Three of them won a chance to present their work at JEC World 2020 in Paris next March.

With the support of MAI Carbon and local universities, the Student Program was also a great success with more than 300 students attending specific conferences and getting to visit the show within a guided tour.

Through the exclusive Business Meetings Program, JEC Asia 2019 offered visitors and exhibitors access to effective marketing and relationship-building opportunities. Five hundred fifty business meetings took place over the three days of the show. These meetings were tailored to the specific needs and priorities of these professionals while allowing them to strengthen their positions, get involved in new programmes, and meet new partners. Four composites sites and institutes tours were also provided to go even further in the discovery of the Korean composites’ ecosystem: Win & Win Co, Kookmin University (with Hankuk Carbon), Kctech and Hanyang University.

After three days of demonstrating the bright future ahead of composites, JEC Asia 2019 welcomed more than 200 exhibitors showcasing the latest innovations to more than 6,600 attendees from 49 countries in Seoul. From global brands to visionary startups, these companies set the composite world abuzz with the promise of innovation, knowledge, and networking.
Tradefairs

World Congress on Textile Coating to be held next month
Tradefairs

Bolger & O’Hearn’s OmniBloq to be used as DWR technology